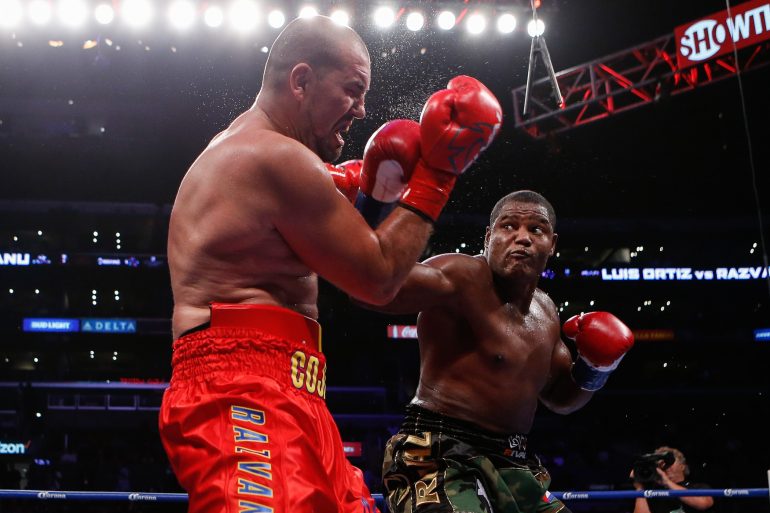 LOS ANGELES — The last time Luis Ortiz was in the ring, he was moments away from winning the heavyweight title.

Of course, Deontay Wilder rallied and scored a vicious knockout of the Cuban to retain his belt. That was in March, and four months later, the loss still stung Ortiz. He said the defeat felt like a knife in his heart, but on Saturday, he returned to the ring with a knockout victory of his own.

A right hook, straight left combination floored Razvan Cojanu, who twice attempted to lift himself to the canvas, only to fall down again, before referee Jerry Cantu halted the contest at 2:08 of Round 8.

Now that Ortiz (29-1, 25 knockouts) is back in the win column, the once-beaten 39-year-old has his sights set on another shot at the heavyweight crown.

“In my mind King Kong has not been defeated. I don’t feel I lost against Deontay Wilder,” said Ortiz, who was conclusively knocked out by Wilder. “I want to fight Joshua, but he only fights boxers he’s sure he can defeat. I’m going to ask the government to put me on disability, maybe that way Joshua will fight me.”

Cojanu (16-4, 9 KOs) himself was coming on the heels of a failed heavyweight title bid. The 31-year-old Romanian challenged Joseph Parker for a belt in May 2017, but he was uncompetitive over the 12-round distance.

Ortiz is rated No. 5 by The Ring, and he figures to get another crack down the line. Saturday’s performance was exactly what Ortiz needed to show he’s still a dangerous force in boxing’s glamour division, even if his opponent was made to order.

“Whatever comes next, I’m ready,” Ortiz said. “I’ll keep on going. I won’t shy away from any challenge. I’m ready.”