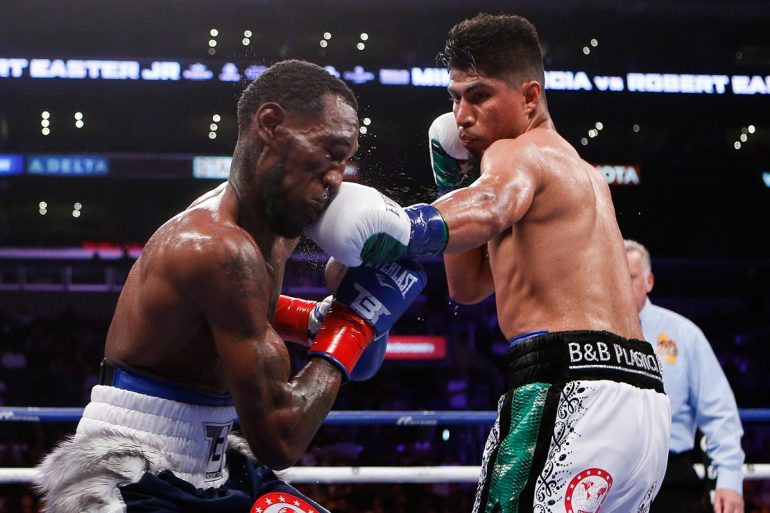 Mikey Garcia was too much for fellow lightweight beltholder Robert Easter Jr. to handle, but what happens if he takes on welterweight destroyer Errol Spence Jr. next?
28
Jul
by Mike Coppinger

LOS ANGELES — If Mikey Garcia has a peer in boxing, he’s yet to meet him in the ring.

Garcia, who’s won titles in four divisions, turned in another excellent performance Saturday before 12,568 at Staples Center on Showtime, and it’s no surprise. He’s one of the best pound-for-pound fighters in the sport, an extraordinary boxer who possesses impeccable timing, footwork and counterpunching ability.

Against Robert Easter Jr., Garcia revealed another layer to his game. Faced with an undefeated titleholder who boasted a five-inch height advantage, the 30-year-old negated it with non-stop pressure and movement as he closed the distance with ease.

Garcia’s sharpshooting shots created a knockdown in Round 3, and from that moment on, Garcia piled up round after round as he cruised to a unanimous decision victory over Easter to unify two lightweight titles.

“It’s a great accomplishment (to unify titles),” said Garcia, who also captured belts at 126, 130 and 140 pounds. “Now we’re back. I told you guys I was coming for bigger things and now we’re one step closer to achieving that.

“I’m here for the biggest challenges. I don’t know if there is anyone that is a bigger challenge than Errol Spence. I know he’s up to fight everyone, so let’s make it happen.”

Garcia (39-0, 30 knockouts) acknowledged that in order to truly ascend to star status, he needs to defeat someone he’s counted out against. But against Spence, he could be chewing off too much. Spence, too, is one of the best fighters in the sport and his size is formidable for anyone to contend with.

The 28-year-old from Desoto, Texas, is a dangerous puncher, but more importantly, he’s a much, much bigger man than Garcia. The 147-pounder is big even for that division, and he would be facing a man who is considered small for the 135-pound weight class.

Garcia knows he would be given little chance by fans and pundits to pull off the upset. And that’s exactly why the 30-year-old wants a piece of Spence, who was ringside to scout his potential future foe.

“It will be a challenge because he’s defensive and he’s very smart in the ring, but I’m always confident in my ability and I know I’ll come out with the victory,” said Spence, who fully expects to fight Garcia in either November or December, possibly on Showtime pay-per-view.

Both fighters are advised by Al Haymon, and Spence said they’ve each already conferred with the ubiquitous manager to set up the high-stakes bout.

“(Garcia) wants to be pound-for-pound No. 1. I don’t know if he has welterweight power,” said Spence. “I’m excited. I can box, I can walk him down. Me, personally, I’m always confident.”

Garcia is confident, too, and he has no reason to feel otherwise after such a dominant performance, albeit against an opponent who is a level below Spence.

Easter (21-1, 24 KOs) wisely utilized his five-inch height and eight-inch reach advantage in the early going, a departure from his usual propensity to trade on the inside. The 27-year-old native of Toledo, Ohio, employed his telephone-pole jab and made sure to touch Garcia to the body plenty with the left.

Mikey attempted to close the gap with his excellent jab, but Easter was happy to connect with a left hook on the way in. The underdog won the first two rounds on two of three scorecards, but that was the most success he would find all night.

Garcia usually is happy to sit back and counter, but on this night, he ratcheted up the pressure against a lanky fighter who was trying to keep him on the outside with plenty of movement. Fighting in front of his hometown fans in Southern California, Garcia marched forward and winged bombs at Easter.

Even though he was the smaller man, Garcia was the bully in the squared circle and was able to pin Easter into the ropes time and again, and that’s where he did his best work. A jab opened up the guard, and then a right cross followed by his patented left hook — the punch that’s carried him to the upper echelon of the sport — planted Easter on the canvas with about 20 seconds remaining in Round 3.

Garcia continued to stalk, and Easter had no answers. The Ohioan moved around the ring and flicked a jab or two at the hard-charging fighter of Mexican descent, but it had no effect. Garcia swarmed and dipped to land damaging body blows and effectively negate Easter’s size advantage.

From Round 8 on, it seemed like the end could come at any moment. Easter was spent, and Garcia continued to pour on the punishment en route to the decision victory.

“He was just a better man tonight,” said Easter, who had made three defenses of the title he won in September 2016. “I take my hat off to Mikey. He’s a true warrior. I just couldn’t find the timing and I just couldn’t let my right hand go.”

Garcia is rated No. 5 by The Ring pound-for-pound, and he plans to prove he’s the best fighter in the world regardless of weight with an assignment that would finally make him an underdog, and a significant one at that.

He’s up for the challenge, and as long as the odds may seem, it would be foolish to count out a fighter of Garcia’s ilk. Finally, it appears he’ll trade blows with an opponent who deserves to share the same ring.