Robert Easter Jr. tunes out all the talk about Mikey Garcia-Errol Spence Jr. 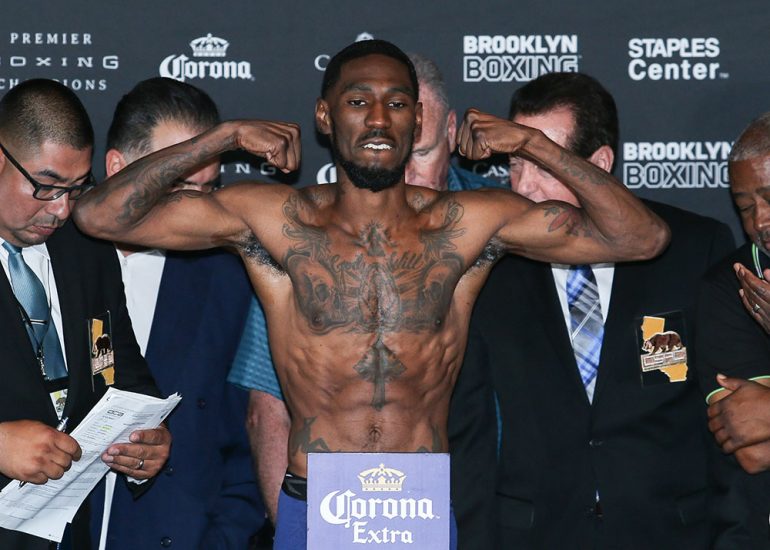 LOS ANGELES — Robert Easter Jr. heard it at Wednesday’s workout, and again at the news conference the following day.

The chatter has been unavoidable. To anyone whom will listen, Mikey Garcia has stayed on message: After he beats Easter on Saturday, he wants to move up two weight classes to challenge Errol Spence Jr.

But if Garcia appears to be overlooking Easter ahead of their lightweight title unification matchup at Staples Center and televised on Showtime, the 27-year-old isn’t showing any indication that the talk is bothering him.

“He can ask for the fights, even after I snatch his belt, he can still ask for them,” Easter, who holds the IBF’s 135-pound title, told The Ring. “There’s not a chip on my shoulder. Like I said, we still have to fight.”

Easter, who is incredibly lanky for the division at 5-foot-11, will stand five inches taller than Garcia, but it probably won’t matter. The Toledo, Ohio, native rarely uses his significant height and reach advantages, and it’s no surprise when you find out the late Diego Corrales is one of Easter’s favorite fighters of all time.

“Chico” loved to bang on the inside, and it’s the same strategy Easter has employed to great effect over four title fights. Still, it would serve Easter well to utilize his jab against Garcia, the superior boxer, if he’s going to pull off the upset and cancel plans for any fight with Spence.

“Whatever is happening for me and working in this fight, I’m going to continue doing it,” said Easter, who trained with Kevin Cunningham in Florida ahead of the biggest fight of his life.

It could be a wise move to latch on with the experienced coach who guided Cory Spinks and Devon Alexander to titles. Easter is one of the best fighters in the world, but he hasn’t looked dominant since he graduated from prospect to champion.

He eked out decision victories over tough fighters like Richard Commey and Denis Shafikov. Many observers even believed Javier Fortuna, who missed weight, deserved the nod over Easter in January.

“Different styles make fights,” Easter said. “Some of them fights, I went in there believing I could get the early KO. After that, I just didn’t stick to my game plan. I feel like every fight I’m the underdog.”

But this time, it’s true. He’s as much as a 7-1 dog heading into his bout with Garcia, which figures to be the toughest test of his career by a mile.

Garcia is The Ring’s No. 5 pound-for-pound fighter, an elite talent who possesses impeccable timing and counter-punching ability. If Easter is going to score a career-defining victory, he’ll have to be at his very best, and a far different fighter than the one who just skimmed by lesser boxers.

“I really don’t pay attention to being overlooked or what my opponents say leading up to a fight,” he said. “On July 28 we still have to get in there and throw these hands. Nothing said by him or anyone outside bothers me at all.

“These are the kind of fights that I’ve always wanted to be a part of. It’s a big fight that I know the fans are going to really enjoy. I’m going to give them something to remember.”