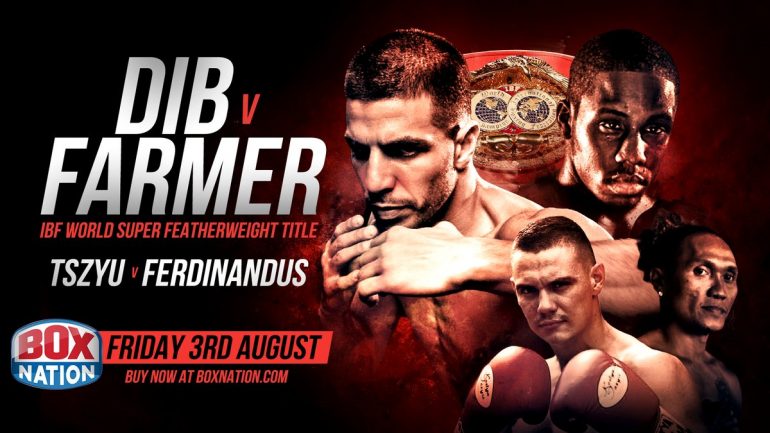 Tevin Farmer is quite likely a fan of second chances.

Farmer , 27, will again fight for a world title belt, this time against Billy Dib, on August 3, Farmer’s promoter Lou DiBella confirmed to The Ring on Wednesday night. The 12-round bout will take place at the Technology Park in Redfern, a suburb of Sydney, Australia, Dib’s hometown. ESPN+ will stream the fight live (6:30 p.m. local time).

Farmer and Dib will fight for the vacant IBF junior lightweight title. Kenichi Ogawa won the vacant IBF title on December 9 in Las Vegas, scoring a controversial split decision over Farmer, in a fight many at ringside thought Farmer won.

The IBF stripped the title from Ogawa on April 19, after the 30-year-old from Tokyo tested positive for androstanediol, a banned substance. The Nevada State Athletic Commission also suspended Ogawa for six months, and overturned the victory to a no-contest.

The two highest available fighters in the IBF rankings were Dib, who is ranked No. 3, and the southpaw Farmer, who is one spot below Dib.

Farmer (25-4-1, 5 knockouts), who resides in Philadelphia, had won his previous 18 bouts leading up to the Ogawa fight. Three months after his most recent victory, on April 29 of last year, a 10-round unanimous decision over Arturo Santos Reyes, Farmer was shot in the hand during a family celebration.

Dib (43-4, 24 KOs), former IBF featherweight titleholder, last fought on December 2, defeating journeyman Phum Kunmat by unanimous decision, over eight rounds. The 32-year-old Dib is unbeaten in his last four bouts since losing by stoppage to Takashi Miura in May of 2015.

Junior middleweight Tim Tszyu (9-0, 7 KOs), who resides in nearby Rockdale, will face Indonesia’s Steven Ongen Ferdinandus (27-15-1, 14 KOs) in a 10-round bout. Tszyu is the son of former undisputed junior welterweight champion Kostya Tszyu.