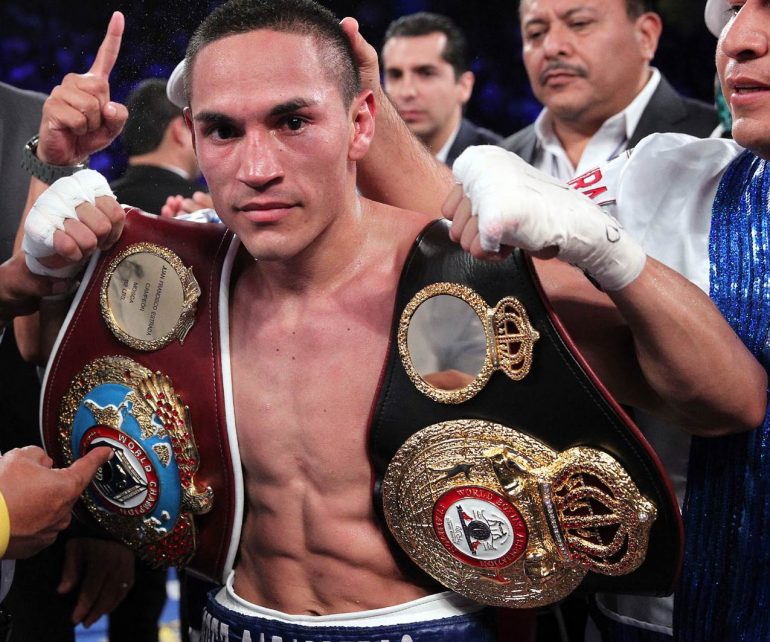 With so many top 115-pounders unavailable to fight on September 8, it was widely expected that the third installment of the fan-favorite Superfly series would be the weakest of the bunch.

And that’s exactly the case — at least on paper — now that all three junior bantamweight matchups have been announced for the show set to take place at The Forum in Inglewood, California.

The Ring’s No. 1 junior bantamweight, Juan Francisco Estrada, will meet Nicaragua’s Felipe Orucuta in the main event, it was announced Thursday. Donnie Nietes will move up in weight for a title bout with fellow Filipino Aston Palicte in the co-feature, and Kazuto Ioka will end his brief retirement with a matchup against Ring-rated 115-pounder McWilliams Arroyo in the opener.

Add in the stiff competition Showtime will bring with its own excellent show that night featuring the highly anticipated welterweight title fight between Danny Garcia and Shawn Porter, and HBO once again has its work cut out.

Still, the first two shows delivered plenty of action, and given the nature of fights contested at this weight, it would be a surprise if Superfly 3 didn’t produce plenty of fireworks, too.

“The fights that have been presented in this series have provided non-stop action and an unparalleled in-arena atmosphere for boxing,” said promoter Tom Loeffler. ” … The stylistic matchups of these three announced fights will provide the type of non-stop action the Superfly events have become known for and the ‘gold standard’ which fans have become accustomed to.”

Unfortunately, the card is missing its leading man, Srisaket Sor Rungvisai, who scored signature victories in the main event of the first two installments. He instead scored a first-round knockout over the weekend in a homecoming title defense in Thailand.

Also unavailable are 115-pound titleholders Kal Yafai and Jerwin Ancajas, who are expected to meet later this year on ESPN. Roman “Chocolatito” Gonzalez, by far the biggest name at 115 pounds, too won’t be on the card; he’ll be returning for the time since his knockout loss to Rungvisai with a bout on the undercard of Canelo-GGG 2 a week later.

That left Loeffler scrambling to put together a quality show that will also serve as a lead-in to the mega fight between Canelo and Golovkin.

Estrada (36-3-0, 25 knockouts) and Rungvisai combined for a hellacious fight in February, and the belief was that the Mexican would have the opportunity to even the score this time around. Instead, he’ll face fellow Mexican Felipe Orucuta (36-4-0, 30 KOs), who will make his U.S. debut on the card.

“I am very excited to return for a third Superfly event card and look forward to giving the fans another thrilling fight,” Estrada said in a press statement. “I need to win so I can get a second shot at the WBC super flyweight world title and a rematch against Srisaket Sor Rungvisai.”

Nietes (41-1-4, 23 KOs) is the lone Ring pound-for-pound entrant on the card, and his arrival at 115 pounds brings plenty of intrigue. He scored a seventh-round stoppage of Juan Carlos Reveco in February on the Superfly 2 card, but now he’s gunning for a title one weight class above.

His opponent is fellow Filipino Aston Palicte (24-2-0, 20 KOs), a relatively unknown fighter in the U.S. Rounding out the card is the return of Ioka (22-1, 13 KOs), the former three-division titleholder from Japan who retired in January. But now he’s back just eight months later — and in a new weight class — for his first bout outside Japan with a fight against Arroyo (17-3, 14 KOs), who is coming off a decision victory over Carlos Cuadras on the last edition of Superfly.

Superfly 3 certainly doesn’t carry the name recognition of previous installments, and it will fighting Garcia-Porter for the attention of boxing fans, but it would be a surprise if the little guys didn’t deliver again.