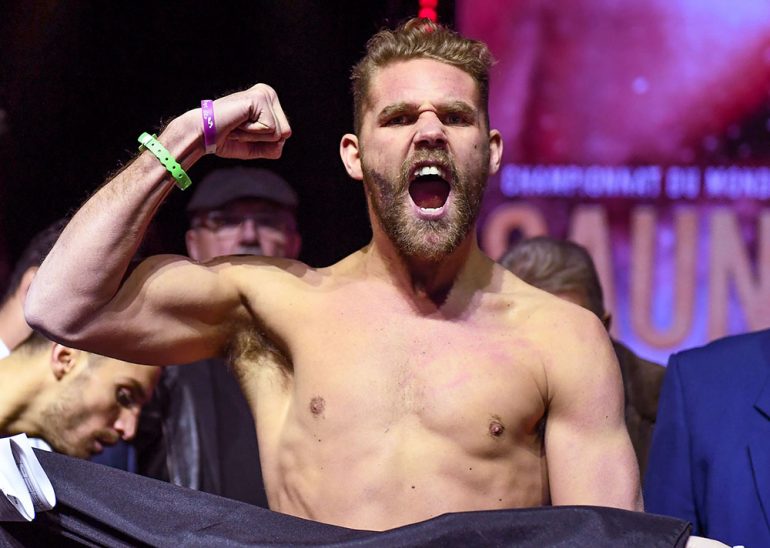 When the WBO ordered Billy Joe Saunders to defend his middleweight title against Demetrius Andrade, there was plenty of uncertainty as to whether the matchup would actually take place.

After all, Andrade had been inactive, and there was chatter that “Boo Boo” wanted two tune-up bouts before taking on such a challenge. However, when push came to shove, and now backed by new promoter Eddie Hearn, the deal got done.

Hearn and Saunders’ promoter, Frank Warren, both revealed Wednesday via Twitter that the sides agreed to terms for the middleweight title fight shortly before the purse bid that was scheduled for 6 p.m. ET.

The fight will emanate from the United States, where Andrade (25-0, 16 knockouts) is based, and be televised on DAZN, the new streaming service set to launch in September with which Hearn has an output deal with. Hearn told The Ring that the fight will likely take place on October 20. The fight is likely headed to the Dunkin’ Donuts Center in Providence, Rhode Island, Andrade’s hometown, a source told The Ring.

“Earn with Hearn, your man is getting spanked,” tweeted Saunders, a 28-year-old from the U.K.

The promotion promises to be epic, with two of the best trash-talkers in the sport face-to-face ahead of a coin-flip middleweight title tilt. They’re also two of the most skilled fighters in the world, both slick southpaws who can box and move.

Saunders (26-0, 12 KOs) is coming off a 12-round undressing of David Lemieux in his opponent’s hometown of Quebec, Canada, a 160-pound title bout that headlined an HBO card in December. It was the finest performance of Saunders’ career, one that includes wins over Andy Lee and Chris Eubank Jr., but now the titleholder will step up to a different class, and he could once again be traveling to his opponent’s backyard.

The 30-year-old from Providence, Rhode Island, will also be stepping way up in class. His best career-victory came in 2013, when he outpointed Vanes Martirosyan to retain his 154-pound title. Since then, Andrade’s been inactive and now campaigns at 160 pounds, where he’s rated No. 7 by The Ring.

Saunders (rated No. 3 by The Ring) owns the better resume and a world of confidence given his recent performance. He was slated to fight Martin Murray this year, but twice withdrew citing injury.

The second time Saunders pulled out, it was revealed that he accepted a unification title fight with Gennady Golovkin for September, had the rematch with Canelo Alvarez fell through. It’s likely he wasn’t actually hurt, but instead trying to preserve a bout with GGG.

And now, Saunders is set up for another significant fight, and the winner will be in prime position to face either Canelo or Golovkin next year. Talk about high stakes.