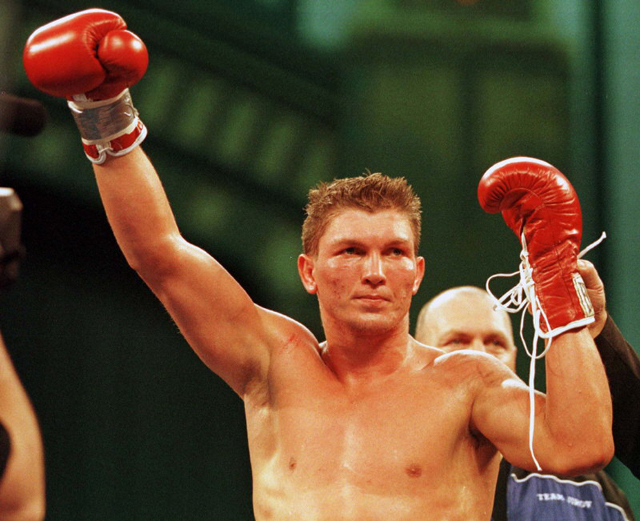 Vassiliy Jirov won gold at the 1996 Atlanta Olympics and was awarded the highly prestigious Val Barker trophy for most outstanding boxer. He went on to claim the IBF cruiserweight title in the professional ranks.

Jirov was born on April 4, 1974, in Balqash, Kazakhstan. His early years were difficult.

“It was pretty tough,” Jirov told The Ring. “I had no father, my mother had six kids, it was hard for her. She was working all the time. We all tried to help her as much as we can.”

As a youngster Jirov was dedicated and hardworking, excelling in wrestling. However, at 11 years old, he switched his attention to boxing after being introduced to the sport by a friend.

Jirov enjoyed a hugely successful amateur career, winning gold as a junior at the European championships in 1992. The young southpaw then moved into the seniors and received bronze at the World Championships in 1993 and 1995.

The tough love approach of his coach Alex Apachinsky was particularly intense.

“In the gym we have a long hallway on the first floor,” said Jirov, estimating the length to be around 100 meters. “It was a very big building. I was standing at the end of the hallway with the German shepherd dog five-feet behind me.

“They would let the dog go as I started to run. At the end of the hallway was a door and if I make it through the door before the dog attacked me, the door would be closed behind me. If not, I had to fight off the dog. I have a rope in my hand so I could put it in the dog’s mouth so it would not bite me too much.”

Amazingly, the coach wanted to use a leopard but settled on the lesser of two evils because they didn’t have one.

Apachinsky had different ideas on how to build endurance. He liked to take his fighters out to the middle of a lake and let them swim five or six miles back to shore.

“It took me three or four hours to swim,” Jirov recalled. “One of the boxers said he wanted to be a champion like me. My coach said, ‘OK’ and took him to the lake with me and dropped us in the lake and said, ‘swim’.

“He swam okay (at first) and then said, ‘I’m drowning and tired. I can’t do anymore!’ My coach said, ‘Nope, you want to be like Vassiliy, you have to finish swimming’ and left in the boat. I had to swim back with him to make sure he didn’t drown. When we got back to the shore, he started cussing and said he would never be back. He left and I never saw him again.”

Jirov came into his own at the Olympics. He stopped future light heavyweight titleholder Julio Gonzalez in two rounds, outpointed cruiserweight title challengers Pietro Aurino and Troy Ross and exacted revenge on Antonio Tarver, who had beaten him in the World Championships. Jirov defeated Lee Seung Bae in the final.

“All the fighters were left-handers like me – I found that pretty funny,” he said. “I was training before the Olympics for left-handers and this prepared me.”

Jirov was understandably elated to win the Val Barker trophy.

“It was the crown on the cake,” he said proudly. “I was working every day for seven, eight hours for 10 years before the Olympics.

“Every day I would come home sleep, eat, train and go to school. I dedicate myself totally to boxing. I had my goal and my life wasn’t personal at all: gym, school, sleep and eat. Not too much pleasure; I thought I’d make pleasure later.”

Jirov received plenty of attention when he left the unpaid ranks with a record of 207-10.

“After the Olympics I moved to America and decided to become the best in professional boxing,” said the former champion. “It was a hard decision for me, but it’s my life and I had to make it happen.”

He signed with Top Rank and make his debut in early 1997 on the undercard of Oscar De La Hoya’s WBC junior welterweight title defense against Miguel Angel Gonzalez.

“The Tiger” moved quickly and after running his record to 20-0 inside two-and-a-half years he met IBF cruiserweight titlist Arthur Williams in Biloxi, MS.

“The guy was tough like a nail,” recalled Jirov. “He was strong, he was a good champion, he punched hard, but he just couldn’t take me. I went to the body and he couldn’t take it anymore; slowly I break him. My coach sat down and made a strategy and it worked.”

Following the Castro fight, issues with a former manager meant Jirov was inactive for 14 months. That was not ideal preparation for the biggest of his career against the then-former two-weight world champion James Toney in April 2003.

Jirov lost his title by wide 12-round decision in a classic slugfest that he firmly believes he should have won. HBO’s Harold Letterman scored it 113-113.

“Everybody who was at the fight say I won,” said Jirov. “I was the champion. I was moving forward. Yes, I got knocked down once, but I was punching him like a punching machine. I believe I won the fight but not for the judges. I understand it is a game of business. Move on and make it better.”

Jirov rebounded with two wins before stepping up to heavyweight to face unbeaten contender Joe Mesi.

Although the naturally bigger Mesi got off to good start, Jirov finished strongly, dropping the American three times in the late rounds. Agonizingly, however, he was one-point behind on all three scorecards at the end of 10 rounds.

Following this fight, it emerged that Mesi suffered two subdural hematomas as a result of the punishment he sustained. The super-popular contender didn’t fight for two years, and when he did make a highly controversial comeback it was at a low level prior to his permanent retirement.

Several months later, Jirov took on former two-time heavyweight champion Michael Moorer. He took the lead but was stopped for the only time in his career in the ninth round.

Jirov fought on but never enjoyed the same success at heavyweight as he had at cruiserweight. He finally retired in 2009 with a record of 38-3-1, 32 knockouts.

“I travelled the world, got paid and kicked some ass,” Jirov said of his time as a fighter.

Now 44, the ex-champion is married and has a daughter from a previous relationship. He lives in Scottsdale, Arizona and works at Scottsdale Boxing Club as a coach.

Jirov graciously took time to speak to THE RING about the best he fought in 10 key categories.

BEST JAB
DALE BROWN:
(Brown) was pretty fast – pinpoint. His jab made me think in the fight. This is why it took me a long time (10 rounds) to knock him out. He moved a lot, boxing a lot, very good boxer. [Rich] LaMontagne, he had a pretty good jab too.

BEST DEFENSE
JAMES TONEY:
His defense was OK; he covered up, it was hard to get him on the inside.

FASTEST HANDS
BROWN: He wasn’t powerful, but he was very fast, especially in the first two rounds. I thought I was losing on points early, but I picked it up and then I knocked him out.

CHIN
TONEY: He had a pretty good chin. Jorge Castro had a good chin too; very tough, he was always attacking.

SMARTEST
TONEY: Probably James Toney. The way he put his game plan together in the later rounds. He set up his punches pretty good. The way he moved. He had the shoulder roll.

STRONGEST
MICHAEL MOORER: Either Toney or Michael Moorer. [Moorer] was bigger than me. I’d say Michael. He didn’t push me back too much. He was actually slow. He was pretty strong; 30 pounds bigger than me. I tried to box him, but he got me. He made the right move and hit me to the back of the head and won the fight.

BEST PUNCHER
TONEY: When I box [Julian] Letterlough, he lost all his [punching] abilities. He thought I’d fight him and I boxed him. He couldn’t do anything. He lost his game plan and didn’t know what to do. Michael [Moorer] stopped me. I could have fought more, but the referee stopped the fight. I’d pick James. Power was there but not too much. I think I went down because I was tired. I got up and fought to the end. Probably him.

BEST BOXING SKILLS
TONEY: The way he moved; it’s hard to catch him. He had a pretty good punch, he’s very slick, he’s a smart guy and he had all the shots.

BEST OVERALL
TONEY: He’s a very skillful guy. He knows how to move, slip and punch and he’s very aware of anything that is happening in the ring.