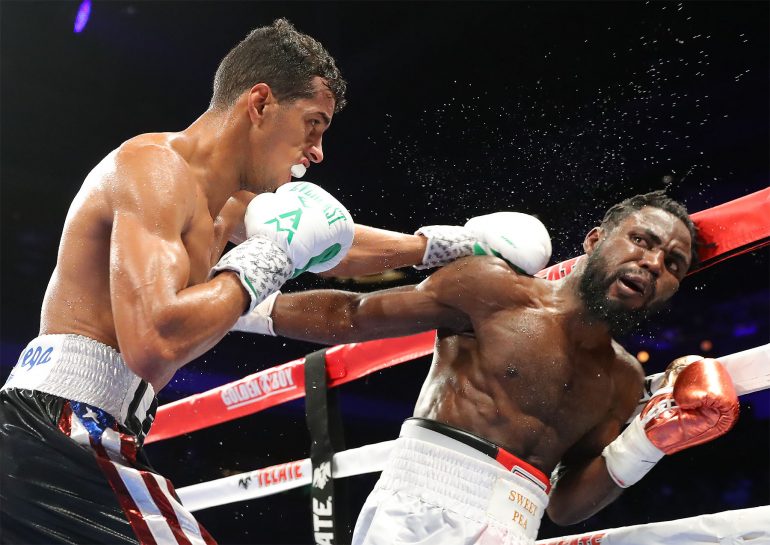 The last of Roach’s pupils with a belt around his waist, Machado scored a unanimous decision victory over mandatory challenger Rafael Mensah in the HBO co-feature on Saturday at Hard Rock Hotel & Casino.

Machado dropped Mensah hard with a right hook seconds before the bell rang to end Round 1, and the Puerto Rican was in cruise control from that moment on. Machado boxed Mensah’s ears off, who was game but never remotely competitive in his first bout outside Africa (all but one of his fights took place in his native Ghana.) All three judges scored it a shutout, 120-108.

Machado did as he pleased in there, but he couldn’t close the show, though referee Russell Mora appeared seconds away from stopping the bout on several occasions. The right side of Mensah’s mouth was incredibly swollen from Round 5 on, and he never threatened to compete.

“Working those rounds was better for me because I haven’t had that experience before (of going 12 rounds),” Machado (20-0, 16 knockouts) said through a translator. “I hurt my left hand, that’s why I stopped throwing it to the body. But I stuck to my game plan, which was to to jab and fight from distance.”

Machado had his left hand wrapped in gauze following the bout, and when he unwrapped it, he revealed a nasty gash over the knuckle on his middle finger. He landed combinations at will, and backed Mensah (31-1, 23 KOs) up to the ropes time and again.

The 25-year-old was fighting with a heavy heart: Mensah’s daughter died last month following a battle with malaria.

“I got hurt early with a shot,” said Mensah, 25, who is the nephew of hall of fame fighter Ike Quartey. “It took four or five rounds for me to come back. He’s a tall and lanky fighter and made it tough to come back.”

The WBA, which incredulously continues to crown two titleholders in many divisions, decided to sanction a fight between Gervonta Davis and Jesus Cuellar for their vacant “super” title in April. That relegated Machado to secondary status with the WBA, even though he was the WBA’s lone titleholder after scoring an eighth-round stoppage of Jezreel Corrales in October.

“Obviously I was upset by (the WBA’s decision), but I beat the world champion and that makes me the real champion, everyone knows that,” said Machado, The Ring’s No. 3-rated fighter at 130 pounds. “I’ll fight anyone. I’m willing to fight Francisco Vargas next.”