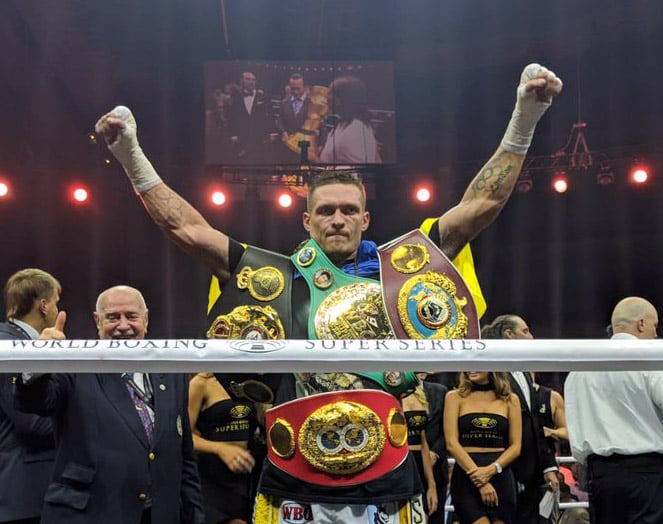 There is only one cruiserweight champion of the world.

In a World Boxing Super Series final that ended up being pretty one-sided, Oleksandr Usyk added the RING, IBF and WBA versions of the cruiserweight title to the WBC and WBO belts that he was defending to emerge as the undisputed champion at 200 pounds.

He did so at the expense of the previously unbeaten Murat Gassiev, whom he dominated with a tidy display of boxing skill at the Olympic Stadium in Moscow, Russia. The official scores were 120-108 and 119-109 twice.

“My team made me look like I looked in the ring tonight,” said Usyk in his post-fight interview with ITV Box Office. “Thank you very much to all – this is our victory.”

The spectacular pre-fight pageantry was followed by cautious action in the opening round. Usyk’s jab and footwork, as expected, were apparent and Gassiev was merely doing some reconnaissance. The Russian power-puncher stepped up his attack in the second and went for the body, but he was outmaneuvered and outworked by the quick-fisted southpaw over the three minutes. 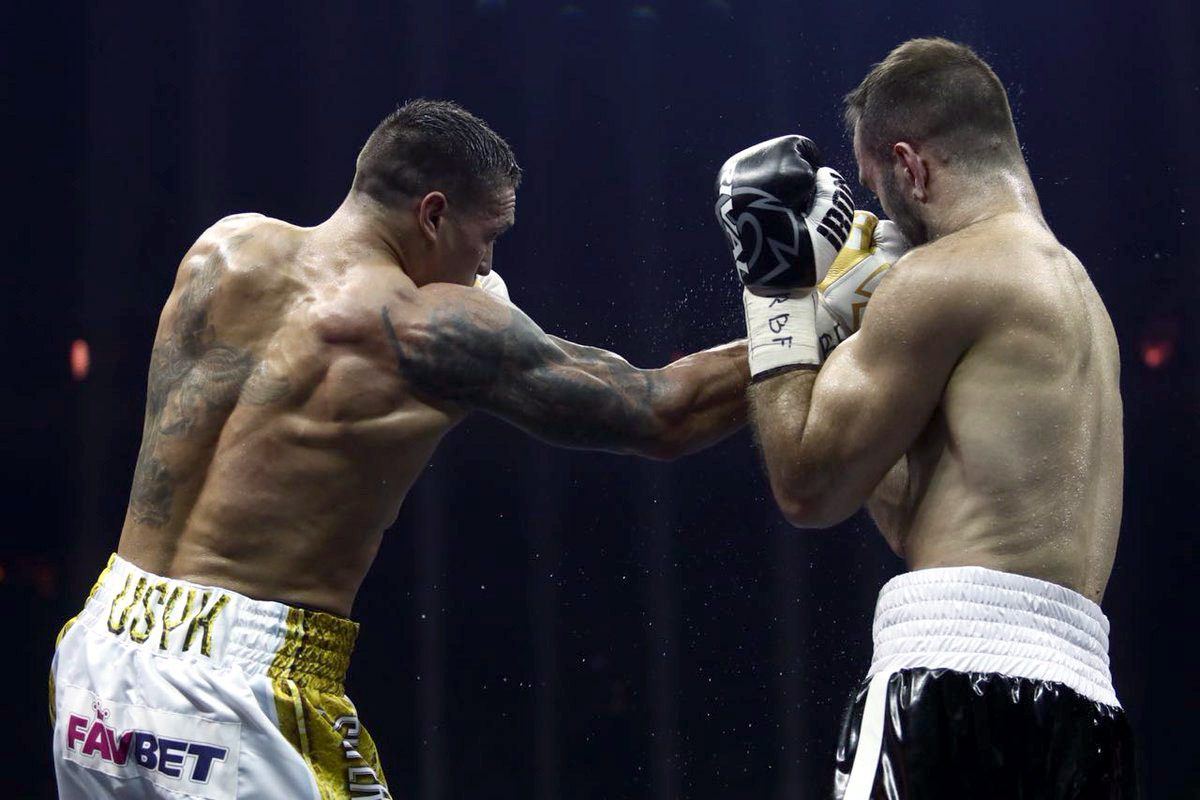 Usyk’s feet were so much faster and he was in control early. The Ukrainian star changed direction and altered his head height to present a more difficult target while popping eye-catching flurries down the middle. Every now and then Gassiev would land a powerful counter left hook to the body, but the home fighter’s opportunities were low.

And then – bang – Gassiev scored with a blockbuster right hand to the chin at the end of the fourth, which had an immediate effect. Usyk, visibly shaken, was very lucky the shot didn’t land earlier and he smartly held on until the session ended.

Gassiev needed more of that, but pretty soon it was normal service resumed. There were dozens of shots coming his way and very few chances to get off. The frustration began for the fighter and his corner, headed by Abel Sanchez, as the rounds passed. Usyk wasn’t landing everything but he was very busy and controlling the action.

In truth, it was a beautiful display of boxing.

There was another terrific right hand from Gassiev in the eighth but Usyk shook it off and carried on with the game plan. Usyk was perhaps a little guilty of refereeing his own fight at times, admonishing Gassiev for low blows before the referee had time to make his own decision on the infringement.

The fight became more and more one-sided and it was target practice by the late rounds. Stylistically, Gassiev never had a prayer and there was nothing he could do with his southpaw opponent, who dazzled down the stretch with sharp offense and brilliant defensive skill.

By the end, Gassiev was so dispirited that he appeared reluctant to return to his corner for feedback. 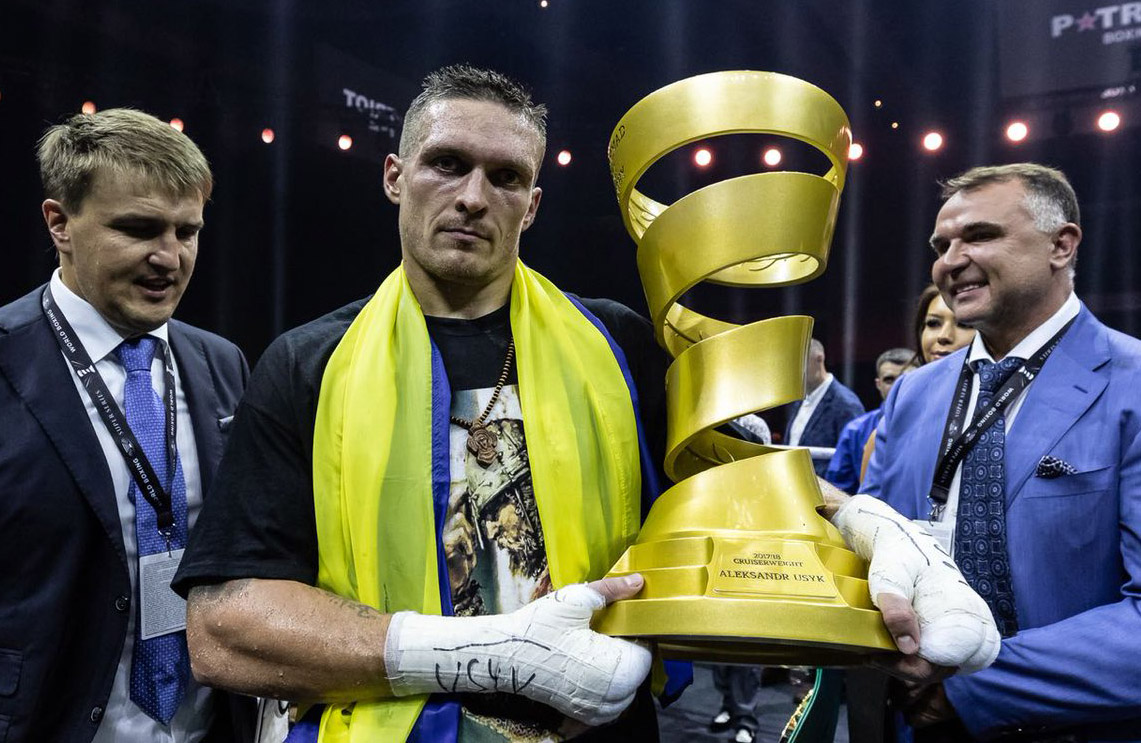 This was a legacy fight and with just 15 straight wins under his belt, Usyk’s legacy is now secure. A gold medalist for Ukraine at the London 2012 Olympics, the 31-year-old boxer-puncher has battered his way through Marco Huck, Mairis Briedis and Gassiev to emerge as the undisputed best in his weight division.

So what’s next? A lucrative cruiserweight clash against Tony Bellew, who is a big star on British shores, could be tempting or there’s the move north to heavyweight. That’s where the serious tests reside and that’s where the big money is. There will be detractors who believe he’s too small, but Usyk can draw inspiration from former cruiserweight champions Evander Holyfield and David Haye, who both made the transition successfully.

“I will sit with my team and make the decision,” said Usyk. “I hear that Tony Bellew is looking for a fight against the winner of the Muhammad Ali trophy. I hope he can see me talking. Hey Tony Bellew, are you ready? And if he doesn’t want to go down (to cruiserweight), I will go up to (heavyweight).”