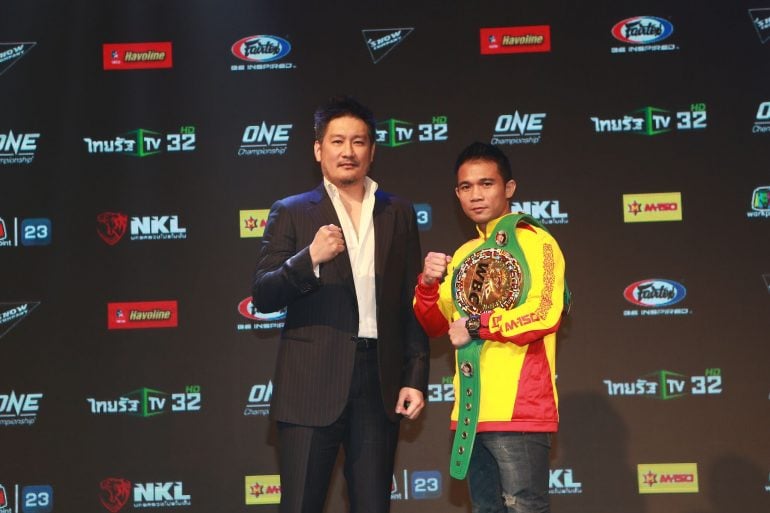 Srisaket Sor Rungvisai, holder of THE RING and WBC junior bantamweight championships, had a non-title homecoming fight in Thailand on Saturday, blasting away Young Gil Bae in a single round.

The fight was scheduled for ten rounds with a catchweight of 120 pounds, but Sor Rungvisai needed just two minutes, 50 seconds to get rid of his South Korean foe. It was apparent from the opening moments that Sor Rungvisai (46-4-1, 41 knockouts), who had twice beaten Roman Gonzalez, was several rungs above Gil Bae (28-7-2, 22 KOs), a one-time title challenger who was seven years older at 38 and hadn’t fought in 15 months.

If Gil Bae had been thinking of calling it a career in 2017, that suggestion was hammered home with Sor Rungvisai’s left hands, which moved him around the ring whenever they landed. The fight was finally halted after Gil Bae was knocked down to the seat of his pants in a neutral corner.

The fight took place at the Workpoint Studio in Bang Phun, and was one of two fights listed on Boxrec. In the other result, Nawaphon Kaikanha (42-1, 33 KOs) won a twelve-round decision over compatriot Likit Chane (16-8, 10 KOs) in a bantamweight fight.

Sor Rungvisai, whose previous fight was a majority decision over Juan Francisco Estrada on February’s SuperFly 2 card, won’t be around for the SuperFly 3 card in September after signing a co-promotional deal (alongside Nakornloung Promotion) with Asian mixed martial arts company One Championship.

The deal was announced at a press conference on July 9, and his first fight with the company will take place on October 6 at the Impact Arena in Bangkok, Thailand against an opponent to be named.

In addition to being the lineal junior bantamweight champion, Sor Rungvisai is also rated no. 6 by THE RING on the pound-for-pound list.