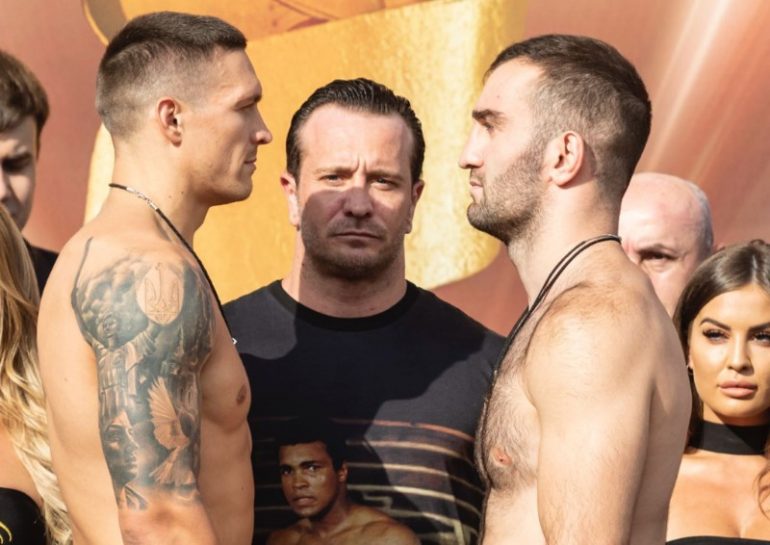 For far too long, the cruiserweights have garnered minuscule attention while in the shadow of the heavyweights.

The division has only been around since 1979 and was created to accommodate smaller heavyweights, fighters like Joe Louis, Rocky Marciano who would be diminutive compared to today’s champions.

Since its inception, the division has produced cracking action fight after action fight. There were Evander Holyfield’s epic fights with Dwight Muhammad Qawi in the 80s. And James Toney’s slugfest victory over Vasily Jirov in the boxing writers’ 2003 fight of the year, to name just a few.

But even then, the cruiserweights never received even a sliver of the same attention poured upon the heavyweights or even the light heavyweights, where Roy Jones Jr. reigned at the time.

For at least one week, all that’s changed. The boxing public is squarely fixated on Saturday’s clash between Oleksandr Usyk and Murat Gassiev in Moscow, one that will produce a new Ring champion in the 200-pound division and for the first time ever, crown an undisputed cruiserweight champion that holds all four sanctioning body belts.

It’s not just the high stakes that has everyone salivating over the World Boxing Super Series final. Usyk and Gassiev are two of the sport’s elite practitioners, and it’s a tantalizing clash of styles.

“I am ready, my team is ready,” said Usyk, a 31-year-old Ukrainian. “When the strong guys meet, the fights are interesting! This is what is so great about this tournament. It is necessary for the sport. I have said it before and I will say it again: the fans should expect a beautiful final.”

Usyk, a southpaw boxer-puncher, is adept at sticking and moving and owns an excellent jab. He’s also tremendously strong, and in his semifinal victory (majority decision) over Mairis Briedis in January, he proved he could dig deep when faced with adversity.

Gassiev, on the other hand, likes to apply non-stop pressure. A pupil of Abel Sanchez’s and a training mate of Gennady Golovkin, Gassiev is a tremendous combination puncher. He used the left hook, right uppercut combo to great effect in his semifinal win over Yunier Dorticos in February, a rousing 12th-round stoppage.

“The training camp before the final has been the same as before my other fights,” said Gassiev, The Ring’s No. 2 cruiserweight. “My opponent is a southpaw, so I have had different sparring partners and you have to do things a bit different tactically against a southpaw. But, besides that, nothing has changed.”

Gassiev (26-0, 19 knockouts) enters the bout a slight favorite, but it’s Usyk who is rated No. 10 pound-for-pound by The Ring and ranked as the publication’s No. 1 cruiserweight. Gassiev also owns far less experience. The 24-year-old Russian only had about 25 amateur fights, while Usyk (14-0, 11 KOs) won gold medals at the 2011 national championships and at the 2012 Olympic Games as a heavyweight.

And for all the love the cruiserweights are being showered with for a change, that’s likely where the winner is headed: heavyweight. The division limit was shifted from 190 to 200 pounds in 2006, making chatter of its best fighters moving to boxing’s glamour weight class even louder.

David Haye, one of the best cruiserweights of all time, made the jump, as did Holyfield years earlier. And it’s going to make a world of sense for the winner of Usyk-Gassiev to do the same.

After all, fights with champions Anthony Joshua and Deontay Wilder would bring either man far more money — and fanfare — than any other bout at cruiserweight could.

The winner will be firmly entrenched in the pound-for-pound rankings, and short of a unification bout between Joshua and Wilder, fans will be clamoring to see either Usyk or Gassiev mix it up with them.

But that’s in the future. For now, give the cruiserweights their due. It’s their time.