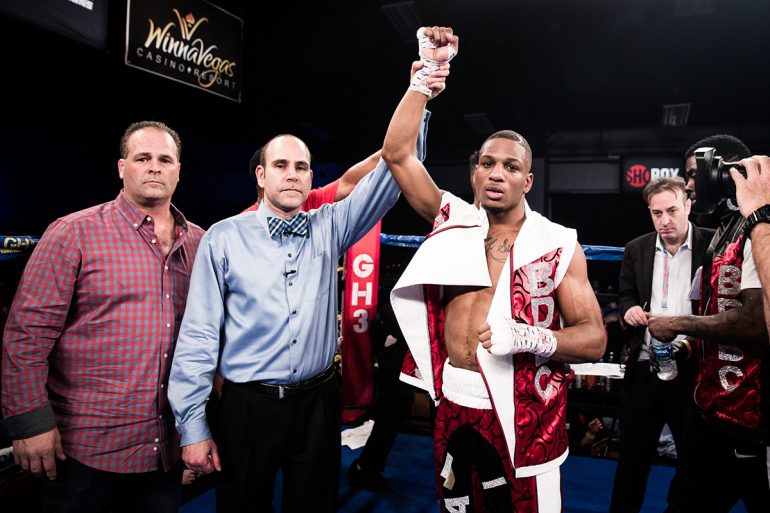 The gym and boxing have always provided refuge for Thomas Mattice. The 27-year-old from Cleveland, Ohio, knew too many friends whom the streets snuffed out, too many wasted lives that didn’t need to be wasted, because they didn’t take the same path that he took.

So each time Mattice enters a ring, he does it with the conviction that taking and dishing out punches is a far greater situation than dodging bullets or looking through iron bars, where too many people Mattice knew growing up now reside.

Another opportunity for Mattice (12-0, 10 knockouts) will arrive this Friday night, when he takes on 22-year-old Armenian Zhora Hamazaryan (9-0, 6 KOs), in a scheduled eight-round lightweight bout, as the co-feature of Showtime’s “ShoBox: The New Generation,” from the WinnaVegas Casino & Resort, in Sloan, Iowa (Showtime, 10 p.m. ET/PT).

Mattice, who started boxing late, turning pro at 24 after beginning boxing when he was 17, credits the sport for saving his life. He made his name and built his brand on the streets of Cleveland growing up.

“I fought a lot on the streets and actually knew a couple of guys who boxed,” Mattice recalled. “I fought all the way up about the time when I was 22. I started boxing in the gym, until I was 17, but I did get involved with fights in the street.”

Sometimes those fights got a little dangerous.

“It’s why I say if it wasn’t for boxing, I don’t know where I’d be,” Mattice said. “It’s why I say boxing saves lives. There were plenty of times when I was in the gym, I’d go out to the street, and there was something always happening. Some got killed, or this or that happened.

“Luckily I was in the gym, or I could have been involved or (could have been) the person who could have been shot and killed. I know too many names, and too many people who should be alive today or out working instead of being behind bars. Yeah, you can say that I grew up real rough. When I was 14, I was involved in a fight at a pool, and there was 20 of these guys coming after me and my friends, and there was shooting involved.”

However even the people who hated Mattice, people who went after him in his youth, have shown support for him, as his boxing career has grown. It’s a street code, Mattice said, of which people would pull him to the side and tell him that he had the talent to get off the nasty Cleveland streets.

He has a six-fight stoppage streak but says he never intends to go into fights looking for knockouts but if the chance presents itself, he will try to go for it against the 5-foot-5 Hamazaryan, who Mattice towers over, at 5-foot-9. This will be Mattice’s second appearance on ShoBox, after he stopped Rolando Chinea in seven, back in February.

“I feel great for this,” Mattice said. “My weight is looking good. I’m still making 135, and I just watch what I eat and how I live. My body is telling me that I can still make the weight. It’s scheduled for eight but I’ll look to end this early.

“I know (Hamazaryan) is shorter than me. I know he has some skills, and he’s 9-0 and he’s a pretty good fighter. Someone’s ‘0’ has to go and I’m ready for it. He seems like a slickster-type of fighter, with good head movement. I’ll keep him on the outside and work from there.