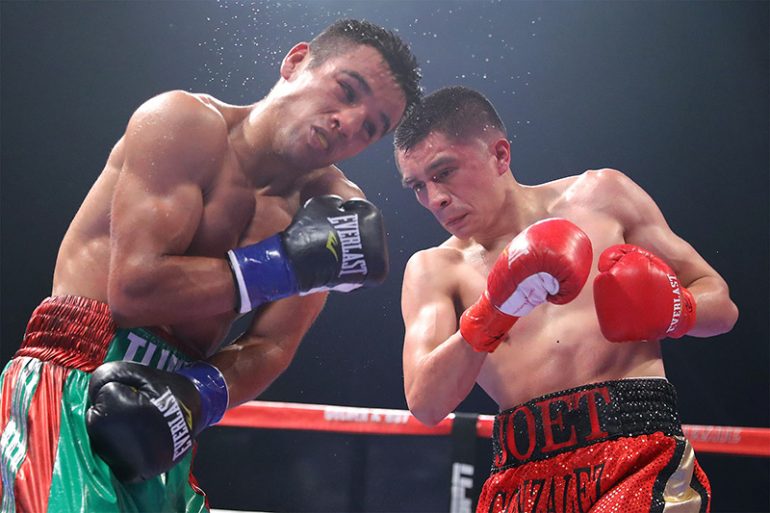 LOS ANGELES – Featherweight prospect Joet Gonzalez passed his first significant test as a pro on Friday night, grinding out a 10-round split decision over Rafael Rivera at The Novo at L.A. Live.

Gonzalez, who resides in the Los Angeles suburb of Glendora, entered the bout having knocked out his five previous opponents. Rivera, who lost his previous bout by decision to Joseph ‘JoJo’ Diaz on September 16 (taking the bout on only a few days notice), was viewed as the toughest opponent Gonzalez has faced in the pro ranks going into the ESPN main event, and he proved to be as difficult as expected.

The shorter Rivera initiated exchanges in the opening two rounds, working behind a jab and throwing combinations to the head of Gonzalez.

A notoriously slow starter, Gonzalez began to let his hands go with more consistently in round three. Gonzalez closed the distance in round four, connecting more to the head and body of Rivera.

Rivera fought in spurts during the middle rounds, but Gonzalez continued to rip combinations to the head and body of Rivera as the fight progressed into the later rounds. Both fighters had their moments in the final minute of round six, but Gonzalez landed several hard right hands to Rivera’s head to end the seventh round.

Gonzalez was the more effective fighter in round eight, but Rivera was the busier fighter during the final two rounds of the fight, connecting more with lead right crosses to the head of Gonzalez.

Estrada dropped Vizcaino midway through the opening round. Vizcaino, who is originally from Quito, Ecuador, would get up and fight back, but it was only a matter of time before Estrada would end the fight.

Moments into the second round, Estrada dropped Vizcaino (7-7, 3 KOs) with a left hook to the body. Referee Zac Young immediately stopped the bout at 20 seconds.

In the opening bout of the ‘Golden Boy on ESPN’ telecast, super middleweight Maricela Cornejo (12-2, 5 KOs) stopped overmatched Samantha Pill (3-1) at 41 seconds in the third round. Cornejo battered the previously-unbeaten Pill until referee Jack Reiss stopped the bout at 41 seconds.

In other bouts:
– Lightweight Christian ‘Chimpa’ Gonzalez dropped veteran German Meraz (61-48-2, 38 KOs) early in round seven en route to a lackluster eight-round decision victory. All three judges scored the bout 80-71 in favor of Gonzalez, who goes to 19-2, 15 KOs.