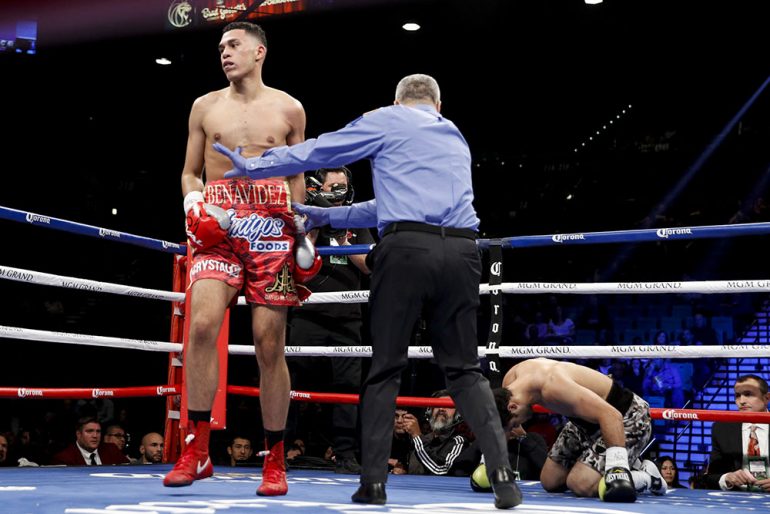 David Benavidez recently settled his promotional quagmire. And now, he has a date for his next title defense.

The youngest super middleweight titleholder in boxing history has a title defense due against Anthony Dirrell, and a source told The Ring the fight will probably land on the Sept. 8 Showtime card in Brooklyn, N.Y., headlined by Shawn Porter-Danny Garcia. BoxingScene.com first reported the news.

Benavidez (20-0, 17 knockouts) was originally ticketed for a matchup with Matt Korobov on July 28 in Los Angeles in support of Mikey Garcia-Robert Easter Jr., but a legal tug of war erupted over his promotional rights and the fight was scrapped. Benavidez signed a contract with Top Rank, but Sampson Lewkowicz, whom he signed with an extension with in November, cried foul.

A cease and desist letter was sent to Bob Arum, and Benavidez returned the $250,000 signing bonus to Top Rank rather than sit on the sidelines while the matter played out in court.

Benavidez wisely avoided being put on ice while and instead will look to build on the momentum he created with an impressive decision victory over Ronald Gavril in February. He’s currently rated No. 4 by The Ring at 168 pounds.

The Phoenix native will be facing the toughest assignment of his career when he takes on Dirrell (32-1-1, 24 KOs), a former 168-pound titleholder who overcame cancer.

The 33-year-old is The Ring’s No. 7 super middleweight, but he’s faced woefully thin opposition since he dropped his title via majority decision to Badou Jack in 2015.

A heavyweight tilt pitting Ring top-10 heavyweight Adam Kownacki and former titleholder Charles Martin will also appear on the telecast, which will oppose HBO’s third installment of the Superfly series.