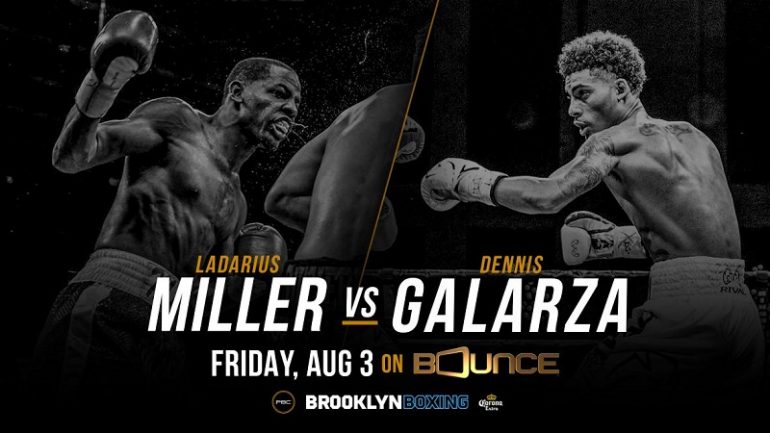 Lightweight prospect Ladarius Miller will square off against Dennis Galarza on August 3, it was announced on Wednesday.

The 10-round bout will take place at Sam’s Town Hotel & Gambling Hall, in Las Vegas. The fight will headline a televised tripleheader on Bounce TV (9 p.m. ET/ 6 p.m. PT).

Miller (16-1, 5 knockouts), who resides in the Las Vegas area, has won his last seven bouts since losing to Rolando Chinea, in February of 2016. The southpaw Miller was victorious in his most recent bout, on May 11, defeating Jose Marrufo by unanimous decision.

The 24-year-old Miller’s most notable bout was a 10-round unanimous decision over Jamel Herring on August 22.

“I feel great right now and happy to get back in the ring,” said Miller, who is originally from Memphis, Tennessee. Galarza is another step up for me and someone who I’m very aware of. I have to be patient in this next fight. If I see an opportunity for a knockout, then I’ll go for it but it’s not the plan.”

Thus far, the 25-year-old Galarza has faced the stiffer opposition of the two, including his most recent fight, a 10 round unanimous decision loss to former junior lightweight and junior welterweight title challenger Edner Cherry on April 13.

“Ladarius Miller has stepped his fight game up and is making tremendous strides with his career,” said Leonard Ellerbe, CEO of Mayweather Promotions. “He’s putting in the work and I’m sure he’ll be ready to take on Dennis Galarza and come out victorious on fight night.

“The bouts leading up to the main event will prove to be crowd-pleasers as well, bringing the fans an overall great night of boxing.”

One fight that could be explosive and entertaining is the 10-round welterweight crossroads bout between Abel Ramos and contender Cesar Barrionuevo.

Ramos (20-3-2, 15 KOs) has won his last two fights against inferior opposition since losing a close, 10-round majority decision to welterweight contender Jamal James on April 13.

The 27-year-old Ramos, who resides in the Phoenix suburb of Casa Grande, lost a 10-round unanimous decision to Ivan Baranchyk, a fight in which both fighters were knocked down. The February 2017 bout was considered a candidate for “Fight of the Year,” by several boxing publications in that year.

Barrionuevo (34-3-2, 24 KOs) will be fighting for only the third time outside Argentina, where he resides in the city of Salta.

Barrionuevo last fought on January 20, knocking out Adrian Veron in the opening round. Barrionuevo has won his last 10 bouts.

The 29-year-old Barrionuevo is ranked No. 6 by the WBC.

In the opening bout of the “PBC on Bounce” telecast, welterweight Juan Heraldez (13-0, 8 KOs) will square off against Kevin Watts (12-2, 5 KOs) in a 10-round bout. Heraldez has not fought since August 26, when he defeated Jose Miguel Borrego, in a clash of unbeaten fighters. Watts stopped Ryan Karl in round five on April 28.