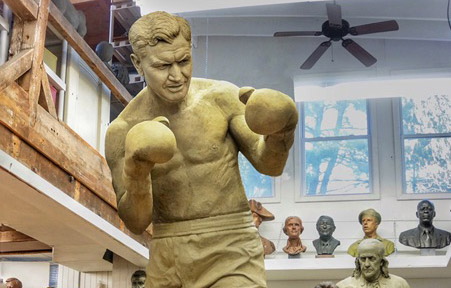 For all the praise sculptor Zenos Frudakis has garnered throughout his career, the most resounding bit may have come without words.

The Philadelphia-based artist had been commissioned to create a statue of late golfing legend Arnold Palmer, who had posed for the work in 2007. With Palmer in the shower, Frudakis wheeled in the artwork on a stand, catching the attention of Palmer’s dog, Mulligan.

“When (Mulligan) saw the sculpture and he saw the face, he jumped up, his tail started wagging and he followed me all the way into place where was gonna work looking at the sculpture like he was looking at Palmer,” said Frudakis.

Though he’d created works of baseball players (Mike Schmidt, Steve Carlton), golfers (Jack Nicklaus, Payne Stewart) and famous authors (Mark Twain), Frudakis had longed for the opportunity to sculpt a boxer, which he figured would be the closest work he could create to the ancient Greek athletes of his ancestry.

“It’s almost like doing the discus thrower; the only difference is he’s got shorts on him. The ancient Greeks didn’t bother with that,” said Frudakis.

Frudakis got that opportunity when the Hudson County Parks and Recreation Department in Northern New Jersey hired him to sculpt James J. Braddock, the late heavyweight champion of the world, for a statue that will stand in an eponymous park in the fighter’s hometown of North Bergen. 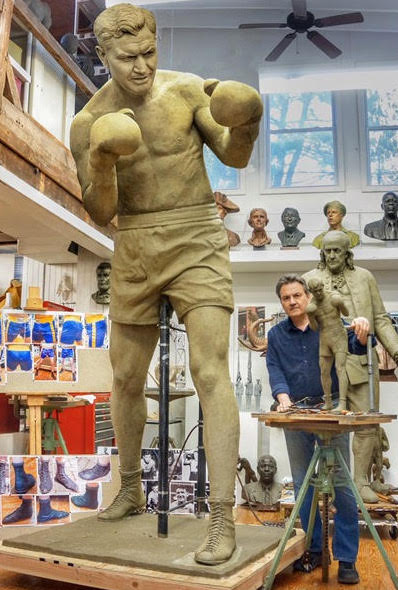 The 10-foot statue is currently in the final stages of construction at Frudakis’ studio and is expected to be unveiled at an hour-long public ceremony on September 26, with the New York City skyline as a backdrop. Two of Braddock’s grandchildren are expected to be in attendance, said Hudson County Executive Tom DeGise.

To research the project, Frudakis collected numerous photos, studied film stills and listened to an audio book about Braddock’s life. Everlast lent a pair of gloves, shoes and shorts from the 1930s to create a more authentic feel.

The statue shows Braddock in a forward-facing fighting stance, as if marching in against an opponent. His physique, an athletic one, if not as chiseled as that of Mike Tyson or Evander Holyfield, portrays him just as he was: a regular guy who just happened to win the heavyweight championship.

The finishing touch Frudakis put on Braddock’s face came in the form of a punch after his wife, Rosalie, criticized the nose as too perfect — not like someone who had 86 pro fights.

“I kind of broke Braddock’s nose just before they sent the head out to the foundry,” said Frudakis.

The story of Braddock is one of perseverance during the Great Depression, with the son of Irish immigrants overcoming disheartening defeats, chronically injured hands and crippling poverty to score one of the sport’s greatest upsets, defeating Max Baer by unanimous decision in 1935 at the Madison Square Garden Bowl in Queens, New York, to win the heavyweight championship.

He lost the title two years later to Joe Louis, setting the stage for “the undercard of World War II,” the Louis-Schmeling rematch, which Louis won by first-round knockout. Perhaps most remarkably, Braddock reimbursed the U.S. government for relief benefits during his most desperate times.

Braddock died in 1974, but his legacy lives on in adaptations such as the 2005 Ron Howard-directed bio pic Cinderella Man, which features a highly fictionalized version of Baer as a disrespectful villain, and the Jeremy Schaap biography by the same name.

The home he lived at with his wife, Mae, and their three children still stands adjacent to the park on the corner of 78th Street in North Bergen, though the Bowl has long since been demolished and replaced by a used car lot.

There are still hints of the county’s sustained love for the sport. State of Fitness Boxing Gym, located a few blocks away from the park, uses Braddock’s likeness in its logo. Owner Desmond Boyle says there’s much about Braddock’s story that resonates with locals today.

“His story is representative of the Irish immigrants back then, but it also applies to immigrants now. With North Bergen being a home to so many immigrants, his story of struggle to attain the American Dream is universal,” said Boyle, who donated the ring canvas upon which the statue will rest. Frudakis took note of the blood splattered across it, which helped him appreciate the omnipresent danger associated with the sport.

DeGise remembers the sport’s heyday in Hudson County, when long-gone clubs like the Jersey City Garden and Union Palace in Union City were filled to capacity with fans cheering on fighters like Frankie DePaula and others from the neighborhood.

Though the venues may be extinct, DeGise believes Braddock’s example is one that can inspire a new generation of residents.

“(It shows that) humble beginnings don’t predict how you’re gonna turn out in life,” said DeGise.

“I don’t know whether or not there’ll be a ranch of boxers coming out of Hudson County after this, but it’s important for us to celebrate our heroes and those amongst us in our communities who have succeeded and gone larger than Hudson County. And that’s Jimmy Braddock.”

There are no living pets from the Braddocks to pass judgment on the statue, but Frudakis is certain it’ll instill some local pride in North Bergen.

“I think the idea of having a sculpture of a man who fought to improve his condition … it could be considered a metaphor,” said Frudakis. “The idea that Braddock fought to get out of his economic depression. That became symbolic for a country.”