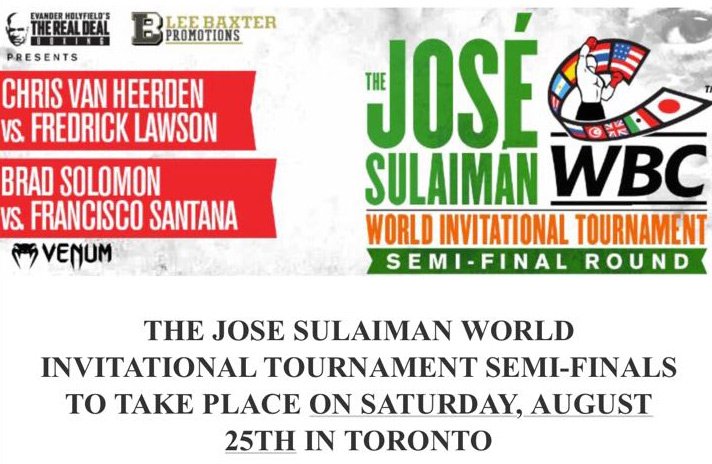 The Jose Sulaiman World Invitational welterweight tournament is down to its final four as its semifinals shift to Toronto, Canada, on August 25.

In one bracket, Francisco Santana will meet Brad Solomon, while the other features Chris Van Heerden against Fredrick Lawson. All four fighters made it to Ontario on the strength of their victories this past April in Louisville, Kentucky, and the eventual winner of the tournament will get a shot at the WBC welterweight title in 2019.

Santana (25-6-1, 12 knockouts) of Santa Barbara, California, is coming off a majority decision win over Felix Diaz, which helped him rebound from back-to-back losses. Solomon (28-1, 9 KOs) of Douglasville, Georgia, earned his spot in the semis with a win over Paddy Gallagher and has won two straight since his lone defeat in 2016 to Konstantin Ponomarev.

On the other side of the tournament, Van Heerden (26-2-1, 12 KOs) of Johannesburg, South Africa, is riding high off his win over Timo Schwarzkopf, and is perhaps best remembered as the fighter who gave Conor McGregor fits in sparring prior to his decision to switch to boxing. Lawson (27-1, 21 KOs) of Accra, Ghana, had also been the sparring partner of a high-profile fighter, working with Manny Pacquiao prior to his fight against Brandon Rios. He defeated Baishanbo Nasiyiwula to get into the semis.

Like the first round of fights, each bout will continue the experiment with a five-judge scoring system instead of the typical three-judge setup in order to establish a consensus verdict, plus instant replay to review disputed calls.

Slated for the undercard will be Sergey Lubkovich, Alex Dilmaghani, Dierry Jean, Kane Heron and Joshua Lupia, according to the event press release.

The card is promoted by Evander Holyfield’s The Real Deal Sports and Entertainment plus Canadian promoter Lee Baxter Promotions, Louisville Top Notch and the World Boxing Council. Venue information will be made public at a press conference set for this Thursday in Toronto.