Luis Ortiz will return vs. Razvan Cojanu on July 28 in Showtime co-feature 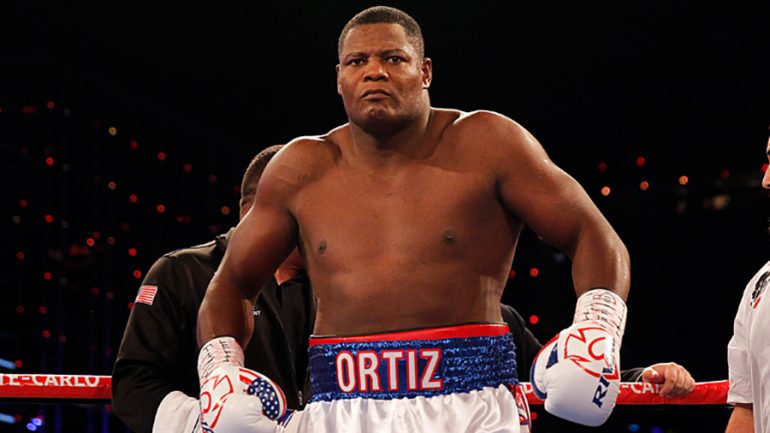 Luis Ortiz had Deontay Wilder in a world of trouble, and he was seemingly seconds away from becoming the first Cuban boxer in history to win a heavyweight title.

Instead, he was knocked out by Wilder in a fight of the year candidate in March, and he’ll begin his climb toward another championship opportunity with a 10-round return bout against Razvan Cojanu on July 28 at Staples Center in Los Angeles on Showtime, the network announced Tuesday.

The fight will serve as the co-feature to the lightweight unification bout between Mikey Garcia and Robert Easter Jr. Mario Barrios will take on Jose Roman in the 10-round junior welterweight opener.

The 39-year-old is regarded as one of the division’s most dangerous punchers, and he only improved his stock with the defeat to Wilder. The Ring’s No. 5 heavyweight scored his best victory when he knocked out Bryant Jennings on HBO in December 2015.

Ortiz won the first four rounds and almost had Wilder flat on his back in Round 5 before the champ rallied. With a victory or two back under his belt, he should be in line soon for another notable bout.

“I’m looking to make a statement on July 28 and get back to challenge for the heavyweight championship of the world,” said Ortiz (28-1, 24 knockouts). “I’m excited to be back in the ring. I am thankful to have this opportunity.”

Cojanu (16-3, 9 KOs) also came up short in his long heavyweight title opportunity. The Romanian challenged Joseph Parker in May 2017, but he dropped a wide decision. The 31-year-old, who now lives near Staples Center in Burbank, hasn’t competed since the setback.

“I’m proud and confident to know that I will be stepping into the ring against a worthy opponent on July 28,” said Cojanu, who is over 6-foot-7. “Luis Ortiz is a world-class fighter with a lot of experience, which will give me the opportunity to show my skills to all the fans.”