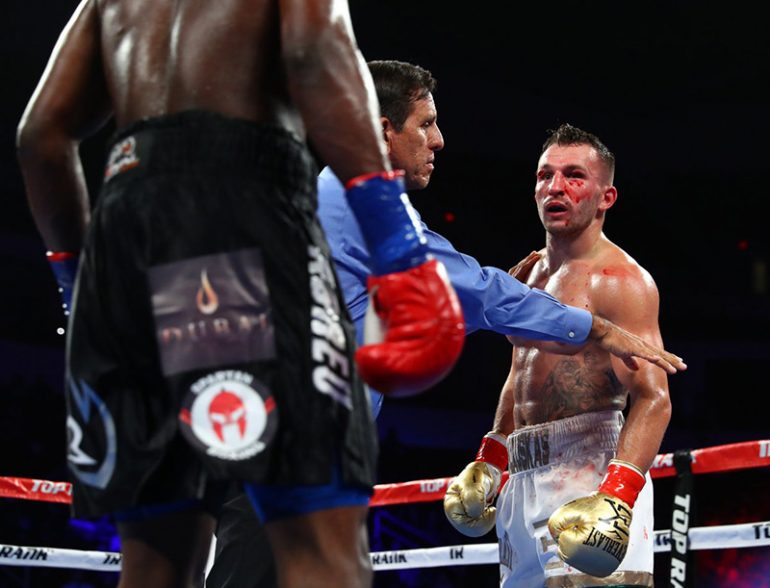 Egidjus Kavaliauskas’ audition to face WBO welterweight Terence Crawford in the fall on Saturday night was satisfactory but not promising. Whether it will lead to a clash with the pound-for-pound rated Nebraskan remains to be seen. For now the Southern California-based Lithuanian will have to content with remaining unbeaten.

Kavaliauskas, THE RING’s No. 9-rated welterweight, won a 10-round unanimous decision over Juan Carlos Abreu at the Save Mart Center in Fresno, California.

The fight was originally scheduled to be the opening bout on the ESPN telecast, but was elevated to main event status when the WBC junior welterweight title bout between Jose Ramirez and Danny O’Connor was cancelled. O’Connor passed out from dehydration Friday morning in an attempt to make the 140-pound weight limit for later that day.

From the opening bell, Kavaliauskas (20-0, 16 knockouts) worked the center of the ring, walking down Abreu. Midway through the round, an accidental clash of heads opened a cut over the right eye of Kavaliauskas. The cut was a non-factor the rest of the fight, which did not alter Kavaliauskas’ offense.

Abreu looked to land one counter punch at a time. Anytime Kavaliauskas was able to get within punching distance, Abreu threw a flurry of punches, most of which missed or hit Kavaliauskas in the arms.

With about a minute left in round five, another accidental clash of heads opened a cut over Kavaliauskas’ left eye.

The cuts over both of Kavaliauskas’ eyes had little effect on him, especially in the later rounds. Kavaliauskas continued to walk Abreu down, but Abreu was able to land an occasional lead right hand to Kavaliauskas’ head.

Sensing he was up late in the fight, Kavaliauskas was content to box, allowing Abreu to press and initiate the exchanges, which brought occasional boos from the crowd.

Crawford is penciled to return to the ring in October, and Kavaliauskas, who is ranked No. 2 by the WBO, was hoping an impressive performance would lead to a title shot. That might have to wait a fight or two.