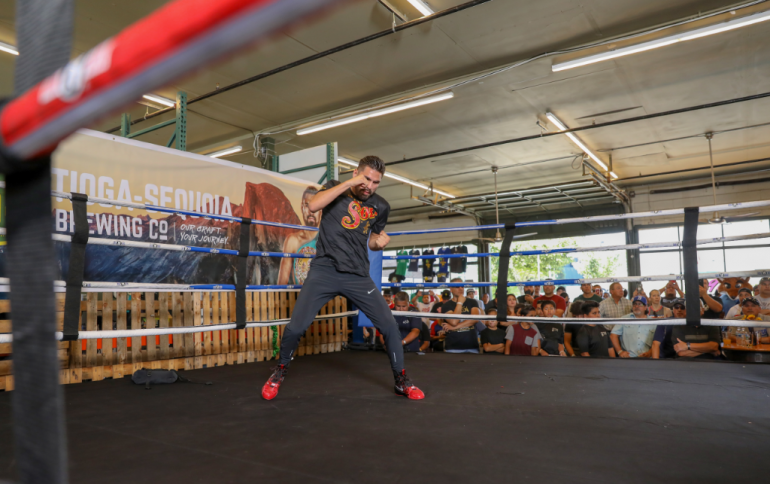 Jose Ramirez’s first title defense will have to wait.

He was scheduled to put his 140-pound title on the line against Danny O’Connor on Saturday in an ESPN main event before his hometown fans in Fresno, California, but the fight was called off Friday after O’Connor was hospitalized. The 33-year-old was severely dehydrated during his weight cut and never even made it to the scale.

Ramirez (22-0, 16 knockouts) won’t remain on the card after Top Rank was unable to find a suitable opponent on 24 hours’ notice. The welterweight bout between Egis Kavaliauskas and Juan Carlos Abreu will now headline the ESPN show, with Andy Vences-Frank DeAlba serving as chief support.

“We tried (to find a new opponent), but you’re asking a lot of things to overcome,” Top Rank vice president Carl Moretti told The Ring. Top Rank CEO Bob Arum said they’ll schedule a new fight for Ramirez as soon as possible. “Somebody has to be approved, licensed, medicaled and on weight. That’s a lot when you, have a week’s notice. We had less than 24 hours.”

Ramirez, 25, won the vacant WBC junior welterweight title with a decision victory over Amir Imam in March at New York’s
Hulu Theater at Madison Square Garden. So for Ramirez, this was a big deal. After years of selling out the Save Mart Center in lesser bouts, he would finally deliver a title fight in his hometown. It would also be his first bout under the guidance of Robert Garcia after he ousted hall of fame trainer Freddie Roach. Not so fast.

“This is the first time I’ve been in this situation,” Ramirez said. “I’m very shocked. I weighed in because I wanted to show everyone that I did my part and cut the weight that I had to cut. I sacrificed 10 weeks away from home and got myself ready for this fight.

O’Connor (30-3, 11 KOs) was pegged as a massive underdog and the matchup was widely panned. It would be the 33-year-old’s first title opportunity, but one that wasn’t earned. The Massachussets native was simply there to lose in a homecoming bout for Ramirez.

But now, he has his health to worry about, while Ramirez will wait for his title fight in Fresno.