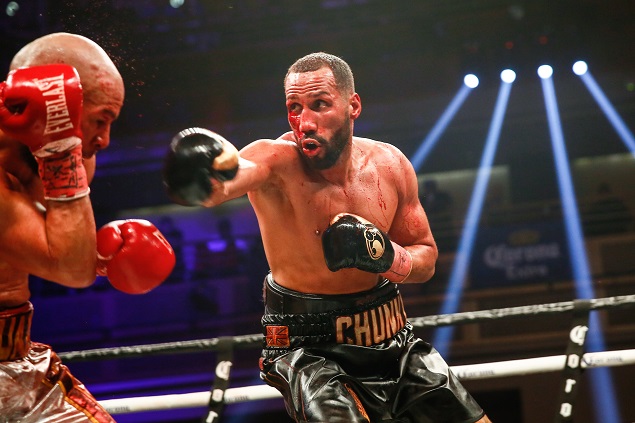 James DeGale’s second title reign is over without a single defense.

The Olympic gold medalist regained his IBF super middleweight belt in a rematch with Caleb Truax in April, but on Wednesday, he announced that’s he vacated his title.

He did so ahead of Thursday’s scheduled purse bid for a title fight between himself and interim titleholder Jose Uzcategui, a dangerous puncher from Venezuela.

“No world champion easily gives up their world title that they’ve earned the hard way in the ring and I’ve proudly held the IBF world title in two reigns with pride and distinction which is why it makes it very hard decision to relinquish the belt,” DeGale said in a prepared statement. ” … I hope that by now vacating it will ease the transition to determine a successor between the interim champion Jose Uzcategui and the next highly ranked available contender.

“I’ve achieved so much in my career, Olympic Gold, British, European and International titles and two-time world champion and I believe I’m at the top of my game right now. I’m in the final phase of my career where I have a few good years left where I can be involved in massive fights and really leave a legacy in the division’s history. My team have been working very hard behind the scenes and we’ve got some very big and exciting news to announce soon.”

DeGale (24-2-1, 14 knockouts) began his first reign when he outpointed Andre Direll in May 2015. The 32-year-old made two successful defenses before he was held to a draw in a fight of the year candidate against Badou Jack in January 2017.

He underwent major reconstructive shoulder surgery that summer, and when he returned, he was shocked by Truax in one of the biggest upsets of the year.

DeGale won his title back, but he failed to impress against Truax, and appeared to be a different fighter than the man who inched near pound-for-pound consideration with his blend of athleticism and boxing acumen.

And now, he’s voluntarily relinquished his title rather than face Uzcategui, though it’s unclear what bigger fights DeGale may have on the table. One such possibility that’s been floated is a fall meeting with middleweight titleholder Billy Joe Saunders.

Uzcategui (27-2, 23 KOs) will have his shot at the title and it will now likely come against Caleb Plant, the IBF’s highest available contender. The super middleweight prospect will be pegged as a heavy underdog. After all, he’s untested, and Uzcategui’s stock has risen steadily since his first fight with Dirrell last year.

Uzcategui, 27, was disqualified after dropping the American to the canvas with a series of shots, though the last one landed after the bell. In the rematch earlier this year, Uzcategui left no doubt with a sustained beating dished out on Dirrell before the fight was halted in the eighth round.