Commentary: Who won the weekend? 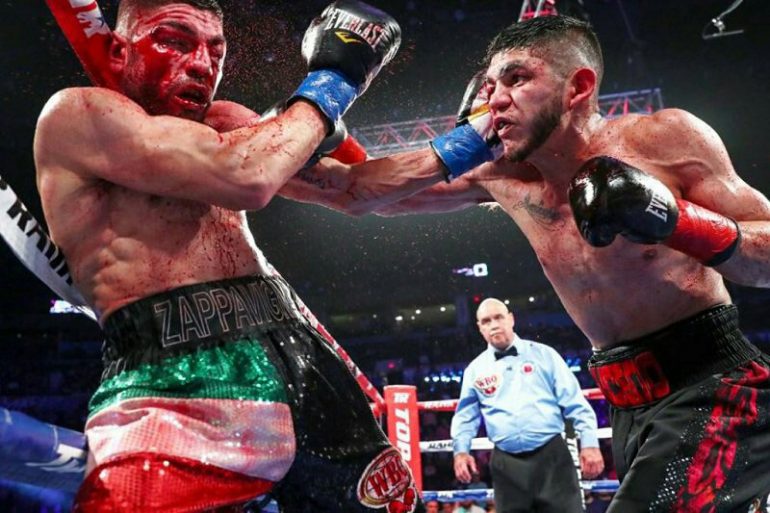 After Friday night fights and Saturday’s scraps, we are left with this question: Who Won the Weekend?

What one boxer’s stock rose the most after gloving up on July 29 or July 30?

There isn’t an overwhelming mass of contenders lumped together, actually. Welterweight Rashidi Ellis, the Massachusetts-based boxer, did indeed lift his mark to 20-0, but his foe Alberto Mosquera didn’t provide a style matchup that led to a real breakout effort for the Golden Boy boxer. “Ellis (20-0, 13 KOs) dominated the bout but failed to shine against an opponent who had very little to offer except courage and a sturdy chin,” is how Nigel Collins assessed it for ESPN. With Mosquera often trying harder to not get hit than hit, Ellis handled it the best he could, but the bout didn’t achieve liftoff.

Long Island light heavyweight Joe Smith (24-2, 20 KOs) will look back on his Saturday night scrap at Mohegan Sun in Conneticut fondly, as he knocked out Melvin Russell in Round 1. Just gloving up was grounds for joy for Smith, the union laborer who exploded on radar screens when he wrecked Bernard Hopkins’ retirement party in 2016. He was hurt in his fight against Sullivan Barrera, in which he was stopped and needed rehab (for a broken jaw), so it had been almost a year since he’s rumbled.

“I hit him with a decent shot when I was walking him down and saw that I hurt him,” Smith explained after. “So, I looked to end it. I would have liked to have gotten some rust off, but I’m happy with my performance. My jaw feels great.”

“We’re looking to go to the top,” Smith’s promoter Joe DeGuardia stated after. “Joe’s plan and goal has always been to be world champion. We wanted (Sergey) Kovalev before this fight, but it didn’t work out. We’re hoping to get him in the fall.”

Our man Lee Groves of THE RING throws his two cents into the pot. “If I am to award it to one boxer, it would have to be Alex Saucedo for overcoming a most severe challenge by Lenny Zappavigna in what is a major contender for “Little Fight of the Year” if not for the outright award. The stakes were high: Fighting in his adopted hometown, doing so as the co-feature of a major card, risking his undefeated record and earning a possible title shot with a win. And the urgency level was raised severely after Lenny Z hurt him in the fourth and opened a serious eye cut. But as deep as Lenny Z dug, Saucedo dug even deeper and produced the goods when confronted with disaster. There were flashes of Ward-Gatti I running through my head, and while both fighters left me in awe, Saucedo earned the nod from me because he got his hand raised.”

I also asked RING’s Anson Wainwright, Who Won the Weekend? “Has to be Alex Saucedo against Lenny Zappa, in a poor man’s Gatti-Ward. A mini classic that both guys showed a ton of heart in. Look at their faces after, their mothers couldn’t pick them out of a police lineup. Great action, Saucedo thrilled his hometown crowd and likely earned – the hard way – a title shot. Both guys spilled crimson for our pleasure and should be commended for a special effort. I look forward to seeing Saucedo next time out and wish Lenny Zappa a long and healthy retirement. Thanks for the outstanding effort Lenny!”

“Well …it would’ve had to have been one hell of a performance to outdo Alex AND Lenny Z,” Moretti told me. Yep, Moretti is saying they both won the weekend, the winner and the “loser.”

Winning isn’t just about getting the W…it’s how you do it…did you leave a buzz trail?

Saucedo did. 5,241 packed into the Chesapeake Energy Arena, and the WAY he won means that he’s cemented his status as a draw, and Oklahoma can, I think, start to count on him as a local franchise. “One hundred percent,” Moretti said. “It’s the OKC Thunder, Oklahoma football and Alex Saucedo!”

Talk to me, friends. Maybe you have another nomination for Who Won the Weekend? Sam Eggington fans, you want to put forth your guy, maybe you believe your kid deserves the nod here. Leave a comment and offer up your take.