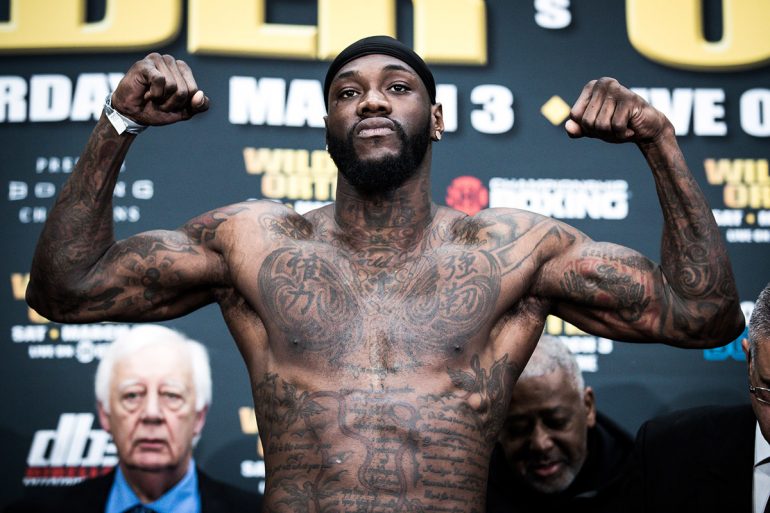 Deontay Wilder was ready to sign on the dotted line.

The heavyweight titleholder would receive a guarantee of $15 million to fight Anthony Joshua in the U.K. this fall in a bout that would crown a new undisputed champion.

It’d be an absolutely massive fight. Before Wilder could sign, though, Joshua shifted directions after the WBA ordered a fight with Alexander Povetkin, and that title tilt is headed to promoter Eddie Hearn’s new streaming deal on DAZN on Sept. 22.

Wilder (40-0, 39 knockouts) unleashed his frustration at the fight falling through during a sit-down interview taped Thursday in Los Angeles on Showtime’s Below the Belt with Brendan Schaub. Wilder’s co-manager Shelly Finkel intimated during an interview with THE RING that Hearn did little to stop the WBA from ordering the fight with Povetkin because he had no intention of finalizing Joshua-Wilder in 2018.

Hearn rejected the notion and said his offer to Wilder for $15 million still stands for an April 13 showdown with Joshua at Wembley Stadium, but the American isn’t having it.

“I hope Povetkin knock him out. I really do,” said Wilder, who signed to fight Povetkin in Russia in May 2016 before his foe tested positive for PEDs. “I’m done with it.” Wilder said if and when negotiations reconvene, he’ll no longer consider anything but parity.

“It gonna be 50-50 straight across. I’m not accepting no flat fees, no none of that. We done with that, and I can smile and say we done with that, bro. … By not fighting me, and people seeing that I really want it, it hurt them but it helps me out.

“When people see you trying, that’s all that matters. I can only do what I can do. I can’t make a guy get in the ring. It’s a curse being so good because although you’re at the top you still don’t get no opportunities.”

Wilder, 32, will likely rebound with a title defense against Dominic Breazeale in the fall, a man whom Joshua has already knocked out. That’s no fault of Wilder’s, of course. He did his best to consummate the matchup. He accepted the short end of the stick and even agreed to travel to the U.K. to complete the deal.

But now, he’s drawing a line in the sand, and it’s clear when talks continue — and they will at some point — the negotiations won’t be any easier this time around.