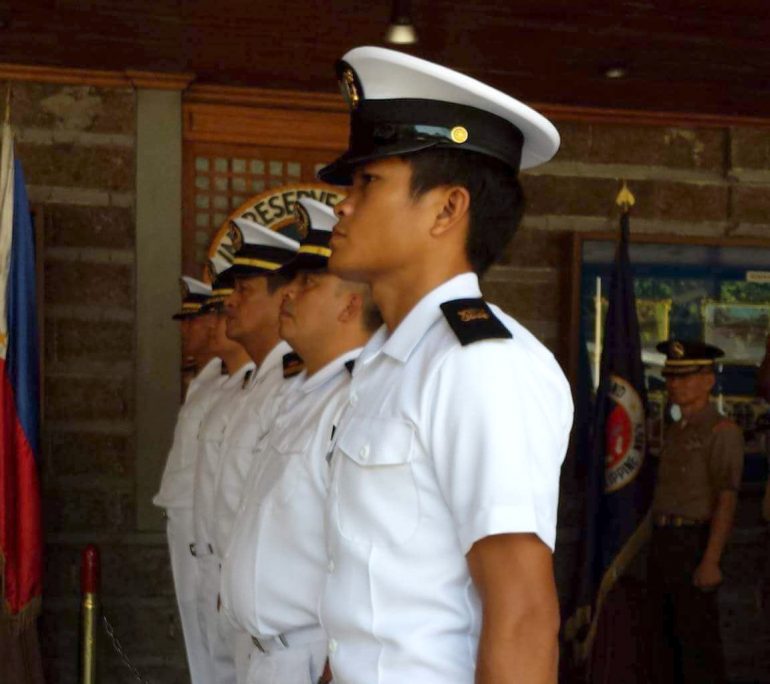 Jerwin Ancajas, the reigning IBF junior bantamweight beltholder, added the title of Chief Petty Officer on Thursday as he formally enlisted in the Philippine Navy Reserves.

The ceremony was overseen by the Philippines Navy Flag Officer-in-Command, Vice-Admiral Robert Empedrad AFP at the Naval Reserve Command in Intramuros, Metro Manila.

Ancajas, 26, of  Panabo City, Philippines is surrounded by several ex-military men in his corner, including head trainer and manager Joven Jimenez (a former Navy man himself who trained the Navy boxing team) and assistant Delfin Boholst (once a top amateur who retired from the Philippine Army with a rank of First Lieutenant).

Ancajas (30-1-1, 20 knockouts), who has made five defenses of the title he won in 2016, won’t miss any training, since he’s a reservist for the time being, and Jimenez says a deal is still being worked on for his next fight, which he expects to be in the first week of October.

Both Ancajas and WBA titleholder Kal Yafai won their fights on their twin-bill card last month in Fresno, California, which Ancajas’ promoter, Bob Arum, had hoped would build interest in a unification fight between the two.

Speaking after Ancajas defeated mandatory challenger Jonas Sultan on May 26, Ancajas’ matchmaker, Sean Gibbons, said he was less interested in a fight with Yafai, preferring that Ancajas face a “tough, aggressive fighter who wants to fight and doesn’t lead with his head” (a reference to multiple headbutts between Ancajas and Sultan) in a place with a heavy Filipino-American population in California’s Bay Area, like Daly City or San Jose, with the hope of eventually meeting WBC junior bantamweight titleholder Srisaket Sor Rungvisai next year.

“It depends on our promoter, who they want. We’re just ready,” said Jimenez.

Philippine boxers have a long history of involvement with the military. Many of the top amateurs in the country’s history, from Olympians Mansueto “Onyok” Velasco to Ancajas’ stablemate Mark Anthony Barriga, have been enlisted in various branches, while Manny Pacquiao, an eight-division champion and sitting senator, was promoted to colonel in the Philippine Army last December.