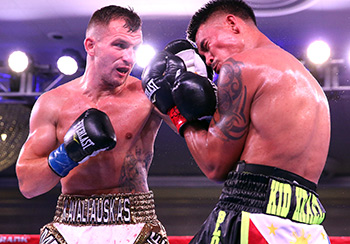 Unbeaten welterweight Egidijus Kavaliauskas will square off against Juan Carlos Abreu, on July 7, Top Rank announced, Tuesday afternoon. The 10-round bout will take place at the Save Mart Center in Fresno, California.

The fight will support the 12-round bout between WBC junior welterweight titleholder Jose Ramirez and challenger Danny O’Connor.

Kavaliauskas (19-0, 16 knockouts), who currently lives and trains in Oxnard, California, scored an impressive sixth round knockout victory over contender David Avanesyan on February 16. Including the Avanesyan fight, the fighter known as “Mean Machine” has stopped his last four opponents.

“This is a great opportunity to show everyone watching on ESPN what the Mean Machine is made of,” said Kavaliauskas, who is managed by Egis Klimas. “I want a title shot soon but I have to take care of business against Abreu to make my dreams a reality. It’s going to be a toe-to-toe battle, and I know I will be victorious.”

A major 147-pound title opportunity late this year or in early-2019 may not be out of the picture. The 29-year-old Kavaliauskas, a two-time Olympian from Lithuania, is ranked in the Top 5, at welterweight, in three of the major sanctioning bodies, with the highest ranking at No. 3 by the WBO.

Kavaliauskas is ranked No. 9 by THE RING.

Abreu (21-3-1, 19 KOs) defeated Luis Hernandez by unanimous decision in his most recent bout, on April 19. The Dominican fighter has won three of his last four bouts.

Andy Ruiz (30-1, 20 KOs) will square off against Kevin Johnson (32-9-1, 16 KOs) in a 10-round bout between former heavyweight title challengers. Ruiz returned to the ring after a 15-month hiatus, on March 10, knocking out Devin Vargas in the first round. The Vargas bout served as Ruiz’s comeback fight from a decision loss to Joseph Parker for the then-vacant WBO title, in December 2016.

Junior lightweight prospect Gabriel Flores Jr. (8-0, 5 KOs) will face James De Herrera (4-4, 3 KOs) in a six-round bout. Flores, an 18-year-old who just graduated from Cesar Chavez High School in nearby Stockton, will be fighting for the first time in California, after mostly fighting in Texas and Nevada, states that allow boxers to fight at the age of 17.