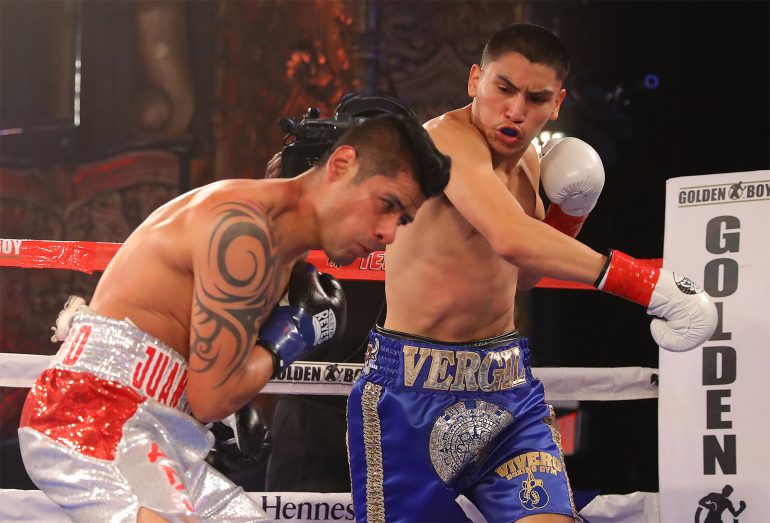 LOS ANGELES – Nine knockout victories is an impressive start for any pro career, including that of Vergil Ortiz. His 10th knockout victory might supersede the previous nine.

Ortiz stopped former junior lightweight world titleholder Juan Carlos Salgado in Round 3 of an ESPN-televised main event at the Belasco Theatre on Saturday.

Salgado is not the same fighter he was when he held the WBA and IBF 130-pound titles in 2009 and 2011, but he is still a relevant name in boxing. Any experience he had in the fight was nullified by the punching power and aggression of Ortiz.

From the opening round, Ortiz walked Salgado down, but kept the veteran at a distance. Salgado did find gaps through Ortiz’s guard, which kept the 20-year-old prospect honest.

“Salgado was experienced and he showed it,” said Ortiz after the fight. “He did catch me a few times.”

Ortiz (10-0, 10 knockouts) closed the distance in Round 3, ripping several combinations to the head and body of Salgado. A right hand followed by a left hook to the body dropped Salgado to the canvas, where he writhed in pain as referee Raul Caiz, Sr. immediately stopped the bout at 1:52.

None of Ortiz’s knockout victories have gone past the third round.

Ortiz could look to fight top-level fighters, but he acknowledges Golden Boy and his management team would want to take things slow in building his career.

“Obviously, I’m not ready for the championship-level fighters, but I’ll be there in two years.” 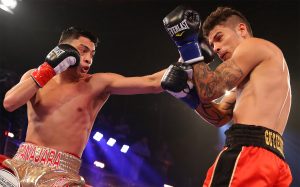 In the co-main event, Hector Tanajara, Jr. notched another victory, winning an eight round unanimous decision over Venezuela’s Roger Gutierrez.

It was a tactical battle from the opening bell between two young fighters looking to take a significant step forward in the lightweight division.

Tanajara (14-0, 5 KOs), who is trained by Robert Garcia, was effective from the outside during the first half of the fight, countering Gutierrez mostly to the head.

Tanajara was the busier fighter throughout most of the fight, but Gutierrez did connect with counter right hands to the Tanajara’s head. Gutierrez chose not to follow up on his attack, at times choosing to complain to referee Wayne Hedgpeth about Tanajara landing low or holding him.

Most of the second half of the fight was dictated by Tanajara, but much of the action was sloppy as both clenched often and missing than connecting with their punches.

Gutierrez, who entered the fight having won his previous four bouts, drops to 19-2, 16 KOs.

In the opening bout of the ‘Golden Boy Boxing on ESPN’ telecast, junior middleweight Ferdinand Kerobyan overwhelmed veteran Edgar Garcia, stopping him late in the second round.

Kerobyan, who is managed by Ronda Rousey, put Garcia on the defensive from the opening bell with his aggressive style. A combination, followed by a three punches dropped Garcia to the canvas. Referee Raul Caiz, Sr. immediately stopped the bout at 2:48.

In preliminary action, middleweight prospect Meiirim Nursultanov battered Josue Obando, eventually stopping him at 1:37 of the sixth round. Nursultanov, who is managed by Egis Klimas, is now listed as 20-0, 7 KOs.