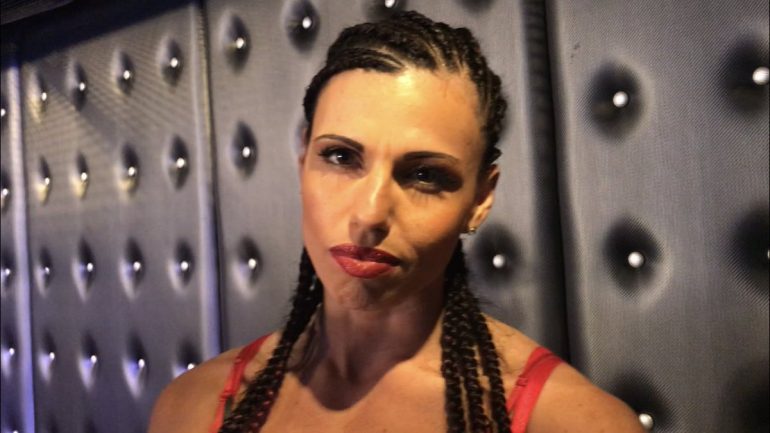 Those are words Alicia Napoleon used to describe her feelings, on Thursday, as she walked in to the Melrose Ballroom, in Astoria, Queens, not as a boxer waiting to step into the ring but as a spectator supporting her friends whose fights hadn’t fallen through.

Even with these emotions harboring beneath, Napoleon never breaks her smile, as she poses with fans for photos, and keeps a positive disposition.

“I sacrifice so much. I sacrifice my time; I sacrifice working. I put everything into this sport and I really depend on this fight going through to get me to the next level, to make sure everything stays in place,” said Napoleon of Lindenhurst, Long Island.

“It is unprofessional because it messes up a lot of things for myself, for the promoter, for the fans, for everybody. It’s a domino effect.”

Even for her promoter Lou DiBella, as difficult to surprise as anyone in the business, Living’s inaction was an unpleasant surprise.

“I’ve seen everything in boxing but Alicia’s opponent signed the contract; everything was done. Didn’t get on the plane, hasn’t responded to phone calls and has simply disappeared,” said DiBella, whose Broadway Boxing show went forward with just five fights.

“Man, it’s a hard business, and it’s getting weirder and weirder.”

Napoleon, known as “The Empress,” has been through this situation many times. Aside from her training going to waste, she also has to have uncomfortable conversations with the fans, who buy tickets from her, about why the fight isn’t happening. Oftentimes there isn’t a satisfactory answer.

“When a fight falls through, I gotta take a million steps back outside of the fight. It really hurts my personal life. It’s not easy; it’s not an easy life being a fighter. It also comes with the territory,” said Napoleon.

“Maybe it’ll entice the people in boxing to put on those big fights, to make it worthwhile and give women more of a platform to stand on, so more of them don’t pull out.”

Napoleon is eager to move forward and says she has spoken to DiBella about fighting on July 21 instead. There are reasons to be encouraged about where she is in her career. In her most recent fight, Napoleon outfought Femke Hermans to win the vacant title. Since then, Hermans defeated Nikki Adler to win the division’s vacant WBO belt, and Napoleon says Adler’s team reached out to her side to discuss the possibility of unification.

And if she’s looking for an opponent whose name is bigger stateside, there’s always two-time Olympic gold medalist and current IBF/WBC super middleweight titleholder Claressa Shields, who faces Hanna Gabriels on Friday, for the vacant IBF and WBA middleweight titles.

Shields (5-0, 2 KOs) has begun calling herself the greatest female boxer of all-time, a self-bestowed distinction DiBella feels is premature. Napoleon believes a clash with Shields is something destined to happen in the future.

“Absolutely, that’s definitely going to happen. The world will see that soon,” said Napoleon about a Shields fight.

“It’s just a best of the best, at that point, so that fight will happen.”