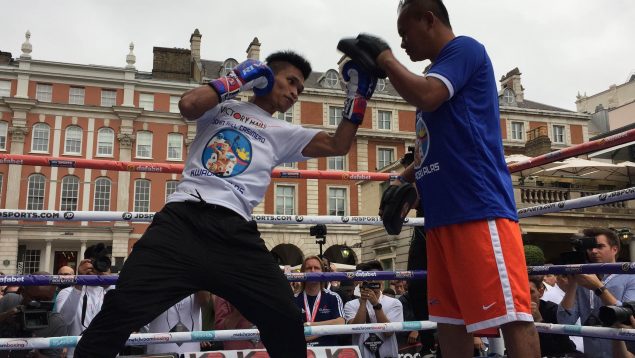 A tuneup fight is in the works for Casimero (24-4, 15 knockouts) to return to the ring on July 30 in Mexico, with an opponent still to be finalized.

“We are looking to get John Riel back in the ring in July to shake the rust off. Then looking at anyone at 115 pounds,” said matchmaker Sean Gibbons, who says Casimero is now a promotional free agent after years working with Filipino promoter Sammy Gello-ani.

Casimero, 28, of Ormoc City, Leyte, Philippines, hasn’t fought since last September, when he lost a shock upset to Jonas Sultan in an IBF junior bantamweight title eliminator. Since April, Casimero has been preparing for his ring return in Las Vegas, where Gibbons feels Casimero has fewer distractions.

Casimero admits he isn’t yet in the shape he’d like to be in, and is considering fighting as a bantamweight.

Carlos Vasquez, a Filipino-American trainer who fought as a pro in the 1990s, has been working with Casimero for the past two weeks. They’ve bounced around a few gyms in the area, but Vasquez says Casimero prefers training at the Bones Adams Gym because it’s more quiet.

“I’ve been working with him on maneuvering in the ring and how to throw ripping punches. I’m getting his mind to start off fresh and hungry like way before he even won his titles,” said Vasquez.

“The vision is to help him become the undisputed in his class, and I think he will.”

Casimero, a pro since 2007, previously held the IBF junior flyweight and flyweight belts, and has defeated the likes of Amnat Ruenroeng, Pedro Guevara and Charlie Edwards.

One person who disputes that Casimero is a free agent is Morris East. East claims that Casimero had signed a three-year managerial contract with him in the Philippines in February. Responding to the story, East says “no one can deal him (without) going through me.”

Update June 19, 11:59 P.M.: Story was updated to include Morris East’s response to the initial report.