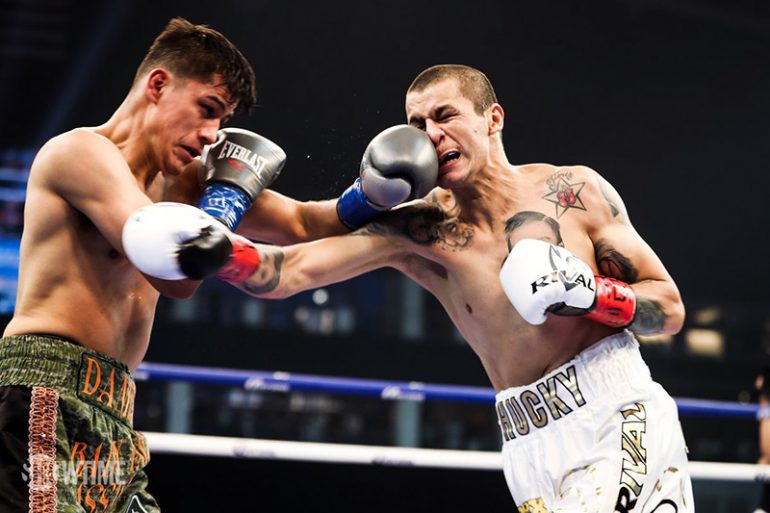 Danny Roman, on by far his biggest stage yet, showed the kind of force he can be in the 122-pound division.

Despite his opponent’s failure to make weight Friday, the fight went on, and Roman took care of business in impressive fashion. The WBA junior featherweight titleholder cruised to a unanimous decision over Moises Flores on Saturday in Frisco, Texas. One judge scored it a shutout, 120-108, while the other scorecards read 116-112 and 118-110.

Roman (25-2-1, 9 knockouts) consistently beat Flores to the punch and concentrated on the Mexican’s body. He hammered Flores with crushing blows to the midsection, and admitted the strategy was concocted after his foe was so clearly weight drained.

“I was a little disappointed, we made weight, we were disciplined, you’re fighting for a championship so we expect you to give weight,” said Roman, THE RING’s No. 5-rated junior featherweight. “He came in with the head so I had to watch out for his head and his hands. … We tried to take him out but it became a little difficult.”

The 28-year-old from Los Angeles wasn’t built up by a big promoter. Instead, he was with local California-based promotional company Thompson Boxing, which meant Roman didn’t enjoy the luxury of fighting easy opponents on the way up. He suffered a few losses, but now, he has two title defenses under his belt after winning the belt with a ninth-round stoppage of Shun Kubo last September in Kyoto, Japan.

Flores (25-1, 17 KOs) hadn’t won since 2016, and his fight with Guillermo Rigondeaux lasted one round. Flores was cracked with a power shot a split second after the bell rang to signal Round 1, and the bout, which was originally deemed a first-round knockout loss, was later changed to a no decision. Now, he has his first official loss.

“I would like to unify,” Roman said, “I would like to challenge any of the champions: Rey Vargas, Issac Dogboe, I’ll even go back to Japan [for a fight with titleholder Ryosuke Iwasa.]”

If any of those fights materialize, especially if it’s against Dogboe, Roman will have a chance to prove he’s the real deal.