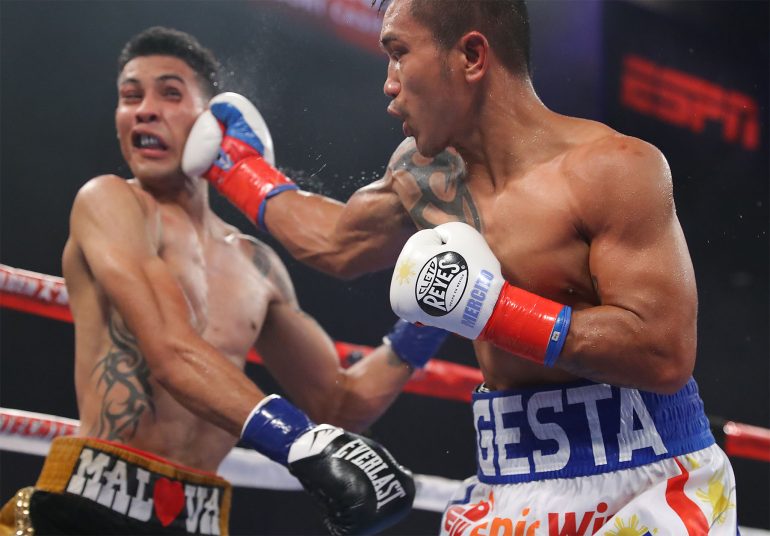 It may not have been appealing for fight fans to watch, but former lightweight title challenger Mercito Gesta was able to grind out a close victory.

Manzanarez, who is originally from the boxing hotbed of Los Mochis, Mexico and now resides in the Phoenix area, had a significant height and reach advantage over the southpaw Gesta, who had difficulties adjusting Manzanarez from the opening bell.

Gesta also dealt with Manzanarez’s awkward style, which led to several instances of clinching and holding between the two fighters. Gesta made it difficult by lunging in with his punches as opposed to setting up his attack behind a consistent jab.

The fight was close throughout the first half of the fight until Gesta began to work from distance, landing left hands to the head of Manzanarez, whose punch output dropped during the final rounds.

The fight was Gesta’s first since losing by decision to then-RING/WBA champ Jorge Linares on January 27. Gesta is eyeing another opportunity to fight for a world title belt and believes his performance against Manzanarez may get him to that point later this year or in 2019. 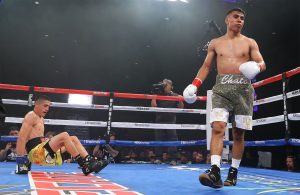 The fight was a clash between unbeaten featherweights, both of whom are promoted by Golden Boy Promotions.

Robles was the more effective fighter throughout most of the fight, getting the better of the exchanges between the two. Midway through the third round, Robles dropped Valerio with a counter left hook to the head.

Valerio (13-1, 8 KOs) could not getting anything going, digging himself a hole as the bout progressed into the second half of the fight. As he pressed the fight, Robles connected with more frequency especially in the eighth round.

Moments into round nine, Robles dropped Valerio in a corner with a counter right hand to the head. Valerio stood up and fought back bravely, but was repeatedly stunned with more right hands as he was backed into a corner. After Valerio received a series of blows, referee Eddie Hernandez stepped in and stopped the bout at 31 seconds.

Francisco A. Salazar has written for RingTV.com since October of 2013 and has covered boxing in Southern California and abroad since 2000. Francisco also covers boxing for the Ventura County (Calif.) Star newspaper, RingTV.com, and FightNights.com. He can be reached by email at [email protected] or on Twitter at FSalazarBoxing