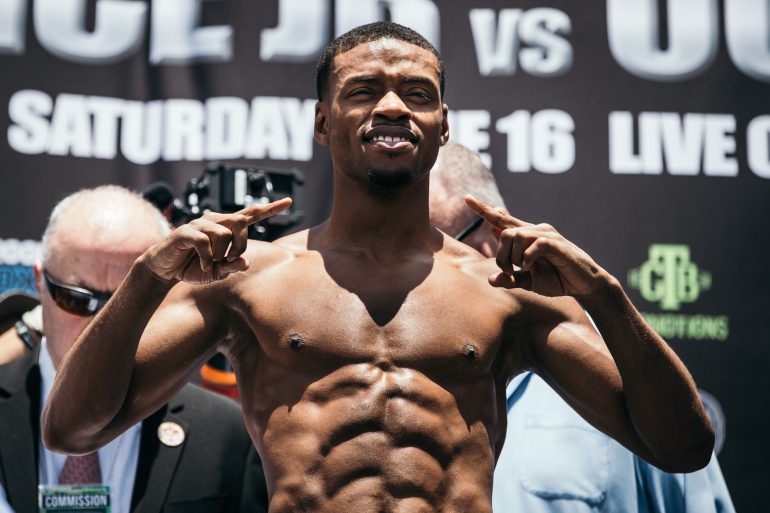 For Errol Spence Jr., the opponent signifies just another routine title defense, but the site suggests anything but.

It’s a homecoming for “The Truth,” and he’ll play to a crowd of over 14,000 on Saturday at The Star in Frisco, Texas, when he fights mandatory challenge Carlos Ocampo near his hometown of Desoto, Texas.

The fast-selling tickets for the Showtime-televised main event is proof that Spence, THE RING’s, No. 7 pound-for-pound fighter, has developed into a bona fide attraction in Dallas.

If Ocampo is being overlooked for his lack of resume and pedigree, there’s plenty of buzz surrounding a potential future bout between Spence and Terence Crawford.

Crawford made his welterweight debut Saturday and absolutely picked apart Jeff Horn en route to a ninth-round stoppage. Crawford picked up a welterweight title and now that’s he’s at 147 pounds, there’s only one fight that really matters in the weight class.

“I think there is definitely a future fight [against Crawford],” said Spence (23-0, 20 knockouts), THE RING’s No. 2 welterweight. “He holds one of the belts and like I said, I want to be undefeated welterweight champion of the world so I’m going to have to come over there and snatch the belt from him. It’s a fight that’s going to happen definitely in the future.”

Before Spence-Crawford can happen — and it’s no doubt a super fight if and when it does — the 28-year-old puts his title on the line against Ocampo, an undefeated fighter from Mexico. Ocampo faces long odds to trouble Crawford, much less upset him. The 22-year-old’s resume is paper-thin, and it’s a mystery why he’s the IBF’s top welterweight contender in the first place.

But Spence clearly isn’t taking him lightly. He showed off an incredible physique at Friday’s weigh-in. Once he gets past Ocampo, Spence is being lined up for a title unification showdown with the winner of Danny Garcia-Shawn Porter, which could take place on Aug. 25. That means Spence could return in December, or maybe he’ll be on the shelf until next year.

After that, a fight with Keith Thurman would make sense before Spence arrives at one of the biggest fight that could materialize in boxing.

“I’ve already fought two Al Haymon fighters, so I don’t think that will stop a fight from getting done. … It’s boxing, so anything can happen. A lot people are leaning towards me and Errol Spence, but we never know what tomorrow holds.”