Ring Ratings Update: A letter from the publisher 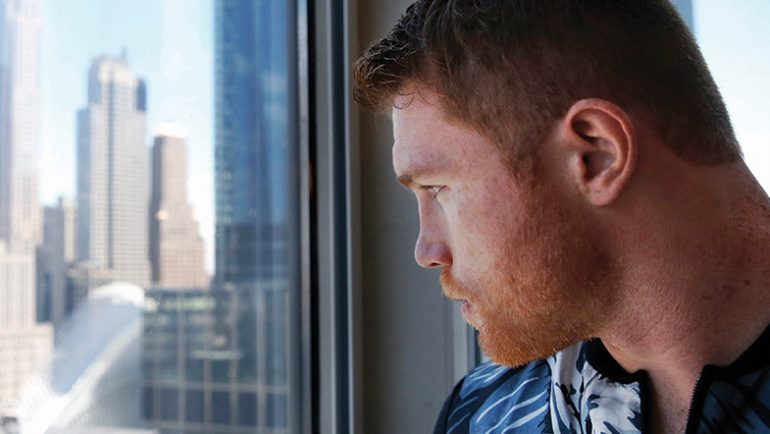 Terence Crawford was dominant and impressive as expected in his title-winning welterweight debut against Jeff Horn on Saturday in Las Vegas. However, before we reveal where Crawford lands in the 147-pound rankings and review the other divisional ratings changes of the past week, we present a very special letter from THE RING publisher Stefan Friedman:

When I was first named publisher of The Ring in February, I noted that I would make mistakes as we went through the process of re-imagining the magazine for the 21st-century.

After a closer study of the efficacy of hair-follicle testing; re-looking at our past and current drug policies; and speaking with those who have been affiliated with Ring Magazine for decades, I have decided to abide by the Editorial Board’s vote to strip Canelo Alvarez of the Ring Magazine Middleweight championship.

To be clear, I personally believe — and know many others who agree — that the evidence to date shows that Canelo did not intentionally take a banned substance. However, that evidence is not conclusive and therefore cannot be used to keep him installed as champion given the suspension handed down by the Nevada State Athletic Commission.

At the same time, it has become clear that our drug and PED policies as currently written are antiquated and too simplistic. Editor-in-Chief Doug Fischer and I have started gathering experts to join an advisory board that can help guide us in drafting a policy that will be current and more robust.

If, as expected, Canelo’s suspension is lifted in September, it will be up to the Editorial Board where to place him in the Middleweight rankings and/or the pound-for-pound list.

As always, I welcome your comments and questions at [email protected]

Pound for Pound: Terence Crawford, now a three-division titleholder, remains at No. 3. Some Panel members toyed with the idea of moving him above No. 2 Vasiliy Lomachenko but nobody felt strongly enough to actually suggest it.

No. 4-rated Canelo Alvarez drops out due to the suspension he is serving for testing positive for the banned substance clenbuterol. No. 10-rated Guillermo Rigondeaux, who hasn’t posted an official victory in almost two years, also drops out. Three-division titleholder (currently scheduled to fight for a fourth major belt in a fourth weight class) Donnie Nietes enters at No. 9. Unbeaten dual cruiserweight titleholder Oleksandr Usyk enters at No. 10.

Heavyweight: Former RING champ Tyson Fury re-enters the rankings at No. 10, after a perfunctory fourth-round stoppage of Sefer Seferi on Saturday in Manchester, England. It was his first bout since earning the linear title from Wladimir Klitschko in November 2015. 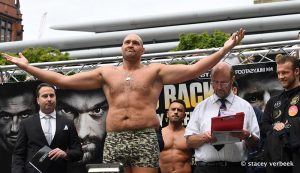 There was some debate among the Ratings Panel if Fury was worthy of being ranked after engaging in what Anson Wainwright deemed a “freak show.”

“What do we do with Fury?” Wainwright asked. “He’s top 10 but he’s had more rigorous sparring in preparation for his return. I’d say bring back just inside the top 10 and let him move up on activity.”

“That was McNeeley-like in its circus act feel,” said Mulcahey. “I would not feel good putting Fury in (the rankings) on the back of three-year absence and that open sparring session… nothing was earned there.”

Managing editor Brian Harty believes Fury is a better heavyweight than the lower four in the top 10 but wouldn’t be comfortable placing him as high as No. 7 off a meaningless victory.

“I definitely think he should come back in somewhere, even if it’s a token No. 10,” Harty said.

Middleweight: The championship is now vacant.

Junior middleweight: No. 2-rated Jermell Charlo holds his spot after dropping No. 7-rated Austin Trout twice en route to a majority decision on Saturday in Los Angeles. Trout, still a handful for any 154 pounder but clearly on his way to gatekeeper status, drops to No. 10.

Welterweight: Crawford enters the rankings at No. 3. Jeff Horn drops to No. 10.

There was some debate as to where Crawford should debut in the welterweight rankings. Most agreed that it should be somewhere between Nos. 3 and 5. 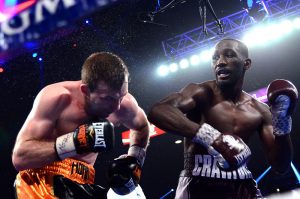 “Crawford took Horn to the woodshed,” said Wainwright. “The difference in class was alarming. Crawford was flawless, but Horn was disappointing, couldn’t get anything going, looked completely out of his depth. Crawford should enter in the 3-5 range. I can see reasoning for anywhere in that range. I’ll go with No. 5 as both Shawn Porter and Danny Garcia have better bodies of work at 147 pounds. I could see Horn dropping totally but I think we should put him at No. 10 and if someone unranked does something impressive they unseat him.”

Mulcahey was in favor of the higher ranking.

“I like Crawford at No. 3,” he said. “Usually, I would be for the lower ranking as that is a packed division but his resume and takedown of Horn is impressive. No problem with No. 5 since he does not have a resume at 147 pounds, but his body looks to be ready for the weight class. Horn is awkward guy and showed courage, No. 10 is acceptable.”

“If ‘Yeah, but it was Jeff Horn’ is an argument for not elevating Bud in the pound for pound, then ‘Yeah, but it was Terence Crawford’ is an argument for not punishing Horn too much, and dropping out is harsh given Manny Pacquiao’s still at No. 6. I just hope I never see Porter-Horn; wait, I just did in my mind and it was excruciating. Maybe to No. 9 or No. 10 for the Aussie? No. 3 is where I’d put Crawford, though I think really it should be Spence, Crawford, Thurman. Crawford-Spence would be awesome, but I think Bud beats One Time.”

Junior welterweight: Unrated American Maurice Hooker traveled to Manchester where he upset Terry Flanagan in front of the former lightweight titleholder’s hometown crowd. Hooker enters the rankings at No. 8.

Featherweight: No. 1-rated Leo Santa Cruz once again outpointed No. 5-rated Abner Mares in a hotly contested 12 rounder on Saturday in Los Angeles. The Panel was in favor of keeping Santa Cruz in the top spot and Mares at No. 5.