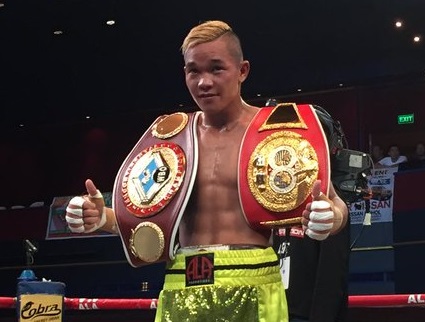 Albert Pagara made good in his return to his hometown, dispatching a credible but outgunned Laryea Gabriel Odoi in three rounds on Saturday in Maasin City, Southern Leyte, Philippines.

The main event of Pinoy Pride 44 was the latest stop in a rehabilitation tour for Pagara (30-1, 21 knockouts), once considered among the brightest prospects from the Philippines until his crushing knockout defeat to Cesar Juarez two years ago. Pagara, still just 24, looked confident from the outset against his Ghanaian foe Odoi (20-4-2, 14 KOs), backing him up and launching hard right hands and digging to the body.

The first knockdown came midway through the second, when a barrage of straight punches sent Odoi down. The punishment continued in the third with a left hook the body which doubled Odoi over and sent him through the ropes. The fight had been beaten out of him by that point, and shortly after falling forward without being punched and seeming reluctant to rise up, his corner threw in the towel to loud cheers from the crowd.

The time of stoppage was 2:30, giving Pagara his fourth straight win since the Juarez fight. Pagara remains ranked by the IBF (no. 7) and WBO (no. 8) and could be edging back towards another step-up two years after his last.

“Albert showed that his focus is back and that he wants to be at the level he was before. Against Odoi, he was expected to dominate which he did,” said promoter Michael Aldeguer of ALA Promotions.

“The Juarez fight was a learning experience for him but he lost to a world caliber fighter, not just to anyone. What Albert gained after the loss was maturity and experience which are traits needed to be in a title contention again.”

Pagara’s older brother Jason (41-3-1, 26 KOs) bounced back from his sixth-round stoppage loss to Hiroki Okada with a third round stoppage of overmatched Indonesian Wellem Reyk (19-19-4, 5 KOs). Pagara, 29, had at one time been the WBO’s no. 1 contender at 140 pounds but slipped due to inactivity.

Also victorious was Jeo Santisima (16-2, 14 KOs), who sent Thailand’s Likit Chane (16-7, 10 KOs) to a third straight loss in their junior featherweight fight with a third round stoppage at the 1:43 point.