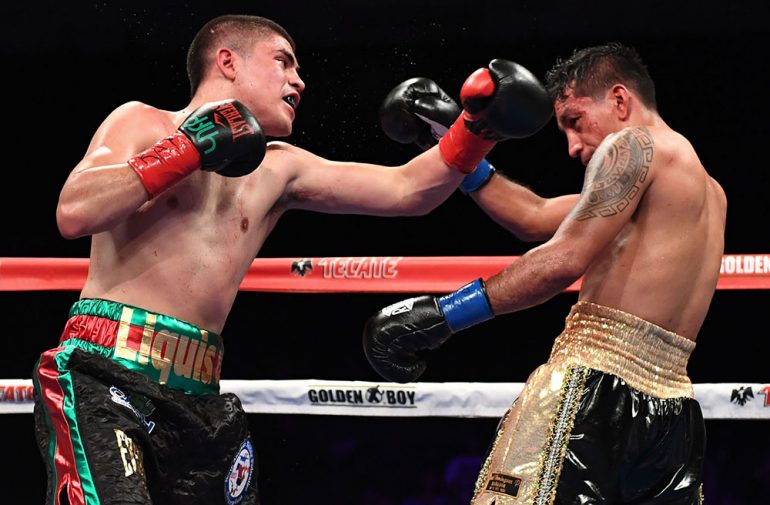 Junior featherweight contender Diego De La Hoya battered and broke down Jose Salgado, forcing him to quit on his stool after the seventh round Friday night at the Turning Stone Resort and Casino in Verona, New York.

De La Hoya and Salgado were scheduled to fight on Dec. 14, but De La Hoya weighed 128.5 pounds, four and a half pounds above the contracted weight agreement at the previous day’s weigh-in. The fight was canceled after representatives from both sides could not agree on financial terms from the fallout of De La Hoya missing weight.

It was all De La Hoya (21-0, 10 knockouts) from the opening bell, putting Salgado on the defensive. Salgado attempted to keep up with De La Hoya, but his punches had little effect on the 23-year-old fighter from Mexicali, Mexico.

Salgado’s punch output dropped considerably and he was in survival mode during the seventh round. To save him from taking further punishment, Salgado’s corner told referee Mark Thomas that their fighter would not come out for the eighth round.

“The fight (finally) took place (Friday night) and thank God it was great,” said De La Hoya, who is managed by his older cousin Joel De La Hoya. “I brawled so that people would see that I am indeed a Mexican fighter. (Salgado) has a lot of experience and a lot of power, but I still brawled to give a great show.

“I’ll need to talk to my team about what’s next, but hopefully something very good.”

De La Hoya, who is ranked No. 6 by THE RING, is the mandatory challenger to face newly crowned WBO titleholder Isaac Dogboe. He is also ranked among the top five by the other three sanctioning bodies.

In junior welterweight action, Danielito Zorrilla (7-0, 6 KOs) knocked out Julio Perez (4-3) with a left hook to the body at 37 seconds of Round 2.

The Golden Boy Promotions card coincided with the beginning of the International Boxing Hall of Fame Induction Weekend, which will take place in nearby Canastota.