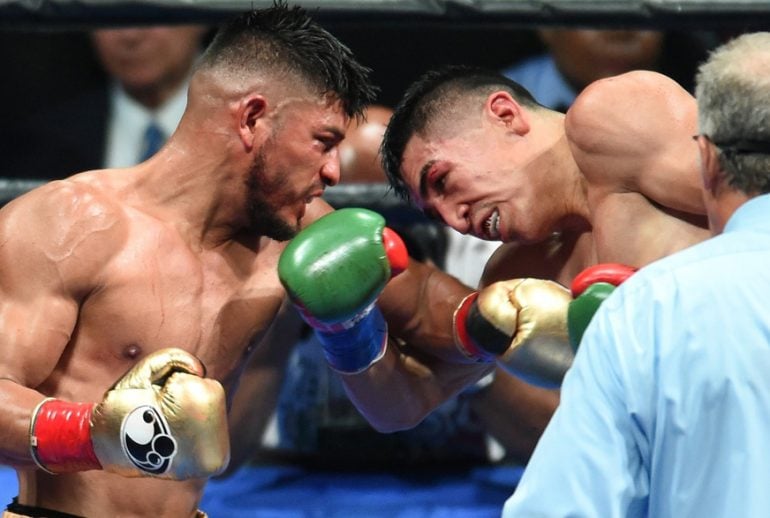 LOS ANGELES — All four fighters comfortably made weight on Friday ahead of Saturday’s Showtime doubleheader at Staples Center.

Jermell Charlo and Austin Trout both weighed in at the division limit of 154 pounds for their clash for the twin brother’s junior middleweight title. Leo Santa Cruz and Abner Mares tipped the scales at 125.4 pounds and 125.8, respectively, for their featherweight title rematch.

“I let my emotions get the best of me three years ago, I’m a different fighter now and I’m goin to show it tomorrow night,” Mares vowed after stepping off the scale. There’s no way I can give a bad show, that’s the type of style I am. Us Mexicans, we united and we give great fights.”

Mares (31-2-1, 15 knockouts) changed trainers after the decision setback to Santa Cruz, linking up with Robert Garcia. However, the 32-year-old has been inactive, with just two fights since he met Santa Cruz in August 2015.

Santa Cruz, meanwhile, has competed four times, with two of those bouts against an elite fighter in Carl Frampton. Santa Cruz lost the first bout to Frampton, but beat the Northern Ireland native in the rematch, and is now ready to take on another top-notch fighter in a return encounter.

Currently, it’s Santa Cruz who sits atop THE RING’s ratings at 126 pounds. But at 154 pounds, it’s Jarrett Hurd who reigns, and Charlo is trying to change that.

The 28-year-old meets Trout, a former titleholder who was stopped by Hurd in October, and who also was outpointed by his twin brother, Jermall Charlo, in 2016.

Trout (31-4, 17 KOs) knows he needs a victory to stay relevant, even if Charlo isn’t considering his past losses. Trout lose two fights – both aforementioned title bouts – before he returned with a stay-busy win in February. Now, he’s once again facing a formidable foe.

“He’s my size, 154 on the button,” Trout said. ” pushed around the bigger guys so i’m ready for this little guy. I felt the sense of urgency my whole career, put my back to the wall, it’s what i do every fight.”