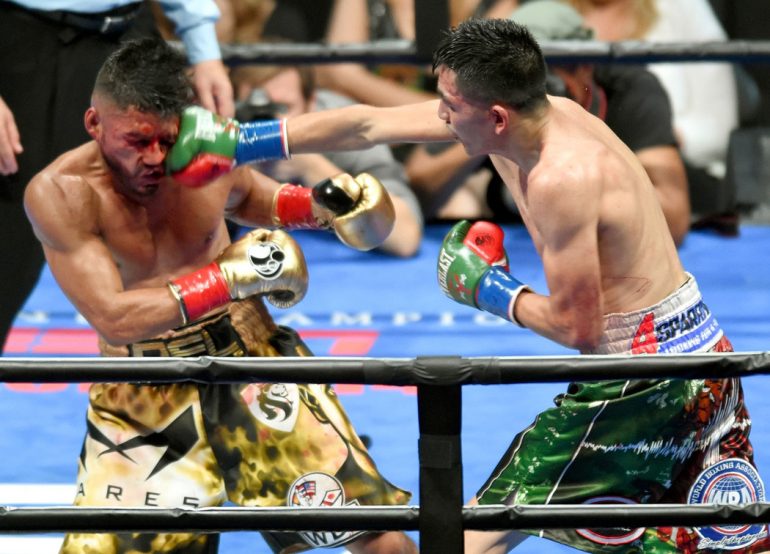 With 12 rounds to diagnose his opponent, Santa Cruz was sharper in the return bout, and this time, he came out on top and reclaimed his featherweight title.

Three years after he edged Abner Mares in a fight of the year candidate, they’ll meet again Saturday at Staples Center (10 p.m. ET, Showtime), and Santa Cruz is confident that he’ll once again be even better in the encore encounter.

The changes Santa Cruz (34-1-1, 19 knockouts) is referring to do? Robert Garcia is responsible for them. He took over Mares’ corner following the decision setback to Santa Cruz in August 2015, and since they linked up, Mares (31-2-1, 15 KOs) has appeared to be a renewed fighter.

He’s boxing more, moving more and Mares has impressed in their two fights together. He promises that he’s a far better fighter under the tutelage of Garcia, but Santa Cruz believes he’s better, too.

After all, since he fought Mares, he’s competed four times and went 24 rounds with an elite fighter in Frampton. Mares, on the other hand, had just two fights, and neither opponent approached Frampton’s level.

“They gave me a lot of experience, I learned a lot from those fights and I think I’m a better fighter since I fought mares the first fight,” said Santa Cruz, a native of Mexico residing in Southern California, just like his opponent on Saturday. ” … I think he’s gotten a little better, but not a lot better to where you can say he’s unbeatable. He’s shown a lot better things but so have I.

“We’re going to try to win bigger this time. My dad says I can even stop him. Mares is good, but he’s already kind of more tired. He’s had more fights, hard fights and stuff like that, so I don’t think his body will respond the same way when he was younger.”

Leo’s dad, Jose Santa Cruz, has battled multiple myeloma but the cancer is currently in remission, and he’ll be able to work his son’s corner on fight night. The substantial purses Santa Cruz earns have allowed him to pay for his father’s rising medical bills, but the money isn’t the only thing that helps the elder Santa Cruz. Leo says his fighting motivates his father to continue to fight his own battle.

Now that he’s approaching 30, Santa Cruz admits his body is “maybe a little more tired” but he remains motivated to reach greater heights in the sport. After he’s through with Mares, Santa Cruz wants to unify titles at 126 pounds, and a fight with with fellow titleholder Gary Russell Jr. is viable for the fall.

But if Santa Cruz can’t obtain such a fight, he says he’ll move up to 130 pounds in pursuit of a title in a fourth weight class.

“The first fight was a really good one, but I think this one will be even better,” said Santa Cruz. “Mares is a great fighter with a great trainer in Robert Garcia, and that’s the kind of challenge I want. We both want to give the fans great fights.”

They combined for over 2,000 punches in the first meeting. If Saturday’s offering approaches that, we’ll have another fight of the year candidate in 2018.