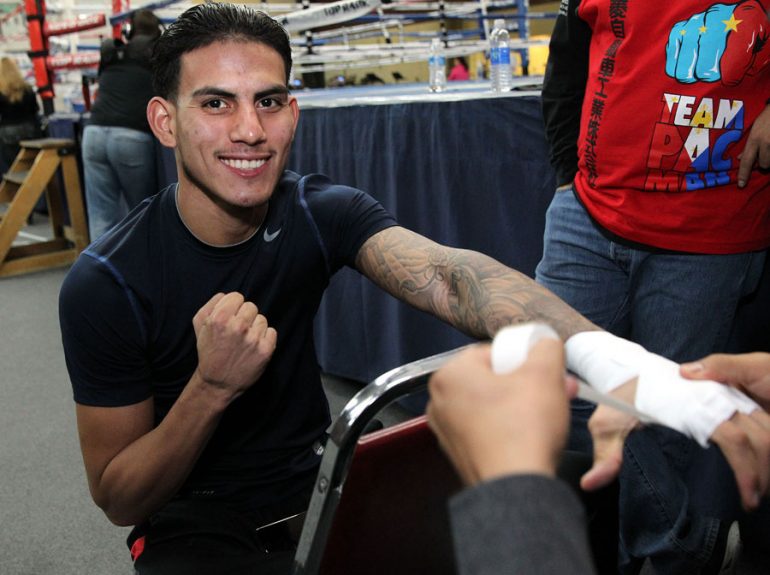 This time last year, Jose Benavidez Jr. was on the mend with hopes that he’d one day get back into the boxing ring. Doctors told him that it wouldn’t be possible after he absorbed a gunshot wound to his leg. But the undefeated fighter, who seemed primed to be a force in boxing, refused to take no for an answer.

It took him over a year, but Benavidez made his return in February with an 8th-round TKO of Matthew Strode. With some of the rust off, Benavidez (26-0, 17 knockouts) will look to put together a spectacular performance this weekend at the MGM Grand Garden Arena against fellow unbeaten fighter Frank Rojas (22-0, 21 KOs) and put himself in position to face the winner of the main event between Terence Crawford and Jeff Horn.

“There’s no doubt in my mind that I’m winning this fight,” Benavidez said confidently on Wednesday. “Hopefully this leads to the winner of Crawford vs. Horn.”

It’s a fight that Benavidez says that he’s been after for quite some time. He admits that he’s not necessarily looking past Rojas, but he’s knows exactly what he’s gunning for. Determined to make the Benavidez family name the most powerful in boxing with younger brother David holding the WBC super middleweight title, Jose knows that he has to take down the best that boxing has to offer. And that is Terence Crawford.

The two have a history that dates back about three years. According to Benavidez, Crawford has been offered a fight with him twice and, for reasons unknown, turned down both opportunities.

There appears to be a collision course set for the two fighters as long as they both win on Saturday. Crawford is headlining the ESPN+ card and has the opportunity to snare Horn’s WBO welterweight title. Although “Bud” is recognized as one of, if not the best pound-for-pound fighters in the world, being under Bob Arum’s promotional umbrella limits his opportunities to face fellow titleholders and big names of the crowded welterweight division. They include Keith Thurman, Shawn Porter, Danny Garcia and Errol Spence Jr. With few places to turn, it’s likely that Benavidez could be next to get the call.

It would be satisfying for a man who was shot in the leg by an unknown assailant while walking in Phoenix. Benavidez wasn’t supposed to be in the boxing ring, much less a fight or so away from facing one of boxing’s best. But his determination to compete could not be denied. His time on the shelf gave him a chance to reflect and mature. With a clear head and the motivation of his brother’s impressive run, Benavidez doesn’t see much standing in the way of becoming the best welterweight in the world. But first he has to get past the relatively unknown Rojas.

“There’s not a lot of tape out there of him, but I’ll wait until the first round to see what he has to offer,” Benavidez said. “It’s a really good fight for me. He has a lot of knockouts, but I’m going to stop him. That’s what I’m training for.”

Incensed by a weigh-in altercation with Crawford back in February, Benavidez is using it as motivation heading into Saturday’s fight. The pair jawed at one another while in Corpus Christi, Texas, for a Top Rank card that signaled the then-25-year-old Benavidez’s return to a boxing ring. Benavidez accused Crawford of ducking him and Crawford suggested that they step outside and handle it. But Benavidez balked at the idea of fighting anywhere but inside of a boxing ring.

“He said let’s take it outside but I’m not going to do that. You want the media to follow us? I’m not doing that. But I’m ready to fight,” he said. “I’m more mature than that now.”

With the injury behind him and a date with boxing’s best in front of him, Jose Benavidez Jr. will have to live in the present on Saturday and handle his business against Rojas. Only then can he truly start thinking about Crawford. He certainly won’t be favored in that fight, but that’s just the way he likes it.

“When we were little, a lot of people in Arizona doubted that we would make it. But that only motivated me and my brother more,” he said. “It’s my time to shine now and I know I can be the best 147-pounder out there.”