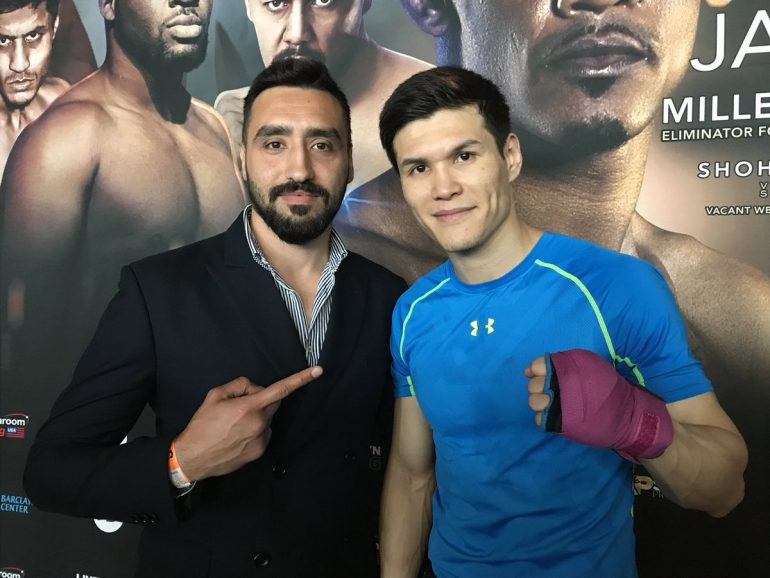 Daniyar Yeleussinov will appear in his second professional bout tonight on the undercard of a Lawrence Okolie-Luke Watkins headlined card at London’s York Hall.

Yeleussinov (1-0, 1 knockout), a two-time Olympian who signed with Eddie Hearn’s Matchroom Boxing following his gold medal run at the 2016 Games in Rio, takes on Hungary’s Zoltan Szabo (24-11, 10 KOs) in a scheduled six-round bout. Yeleussinov is coming off a spectacular TKO victory over Noah Kidd in his professional debut in April at Barclays Center in Brooklyn.

“To make my professional debut in Brooklyn was extraordinary,” Yeleussinov told THE RING in his native Russian while wrapping up his training camp in Florida before departing for London. “This is one of the reasons we wanted to work with Eddie Hearn. We knew what he can do for my career world wide not just on any specific country.”

Hearn recently announced a $1-billion deal to promote 16 cards in the United States over eight years with another 16 shows in the U.K. which will be streamed live by DAZN for a monthly subscription.

“Of course, we were impressed to see what Eddie Hearn has done with the Anthony Joshua’s career,” Yeleussinov said. “Joshua is also a gold medal winner and now is very famous in his home country and around the world. Eddie Hearn understands our vision and we understand his plans. That’s why we felt comfortable working with him and his team and are very happy and excited for the future.”

The 27-year-old welterweight, who just finished his first camp with noted trainer John David Jackson, has a firm grasp on the pressure he faces as he represents his native Kazakhstan to the world.

“I represented my country in the Olympics twice, yes, but I also represent Kazakhstan in everything I do in and outside of the ring,” Yeleussinov said. “Today when people think of Kazakhstan they think of Gennady (Golovkin). Gennady has done a lot for Kazakhstan and a lot for boxing. He is a star. I think we have put the team together to help me achieve the same results. Time will tell but I am very excited to show the world my skills.”

Yeleussinov said the pressure to compete professionally differs from the pressure he put on himself when he performed on the biggest stages around the world as an amateur.

“There is always self-made pressure,” Yeleussinov said. “In the Olympics it was all I can think about. I wanted to win the fight I was in and win gold. I didn’t see anything beyond it. As a professional my goals are different. I want more experience. I want to try different things and then I want to win a world championship and to be undefeated.”

After failing to medal at the 2012 Games in London, Yeleussinov stormed through the 2016 Olympics in Rio de Janeiro shutting out every fighter en route to the gold. In the second round of the tournament, 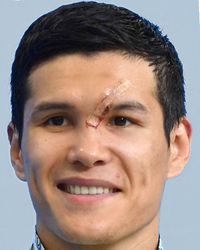 Yeleussinov easily defeated current Matchroom promotions stablemate Josh Kelly who has won his first six bouts as a professional and is considered a hot prospect. In the semifinal bout against France’s Souleymane Cissokho, Yeleussinov suffered nasty cut between his eyes due to a clash of heads. Yeleussinov was forced to head into the gold medal bout against Uzbekistan’s Shakhram Giyasov with a cut which had not yet healed and kept together with a thin  strip of surgical tape.

“I remember my father telling me to ignore the blood and that it will be worth it because we will win,” Yeleussinov recalled. “I don’t believe anything would have stopped me from winning the gold medal. I felt so bad when I lost in London. I didn’t think I would lose so I was going to do whatever necessary to win and make my country and family and fans proud of me.”

Yeleussinov for now will be a man of many homes as he plans to make a name for himself in both the United States and U.K while awaiting a huge homecoming fight in Kazakhstan. Yeleussinov has moved his training camp to Boca Raton, Florida to work with Jackson.

“I am learning new offensive tactics with John,” Yeleussinov said. “He is a former world champion and we understand each other very well. I am learning how to move better and how to sit down on my punches to make a bigger impact. I think the London boxing fans will see a good show on June 6.”