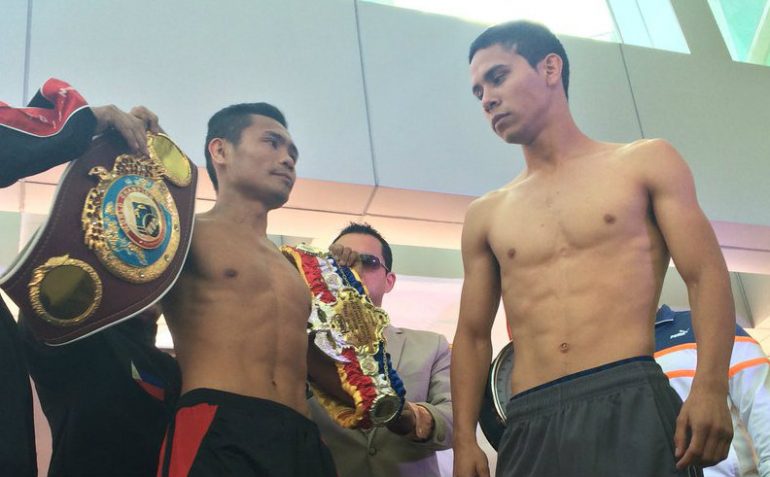 Gilberto Parra Medina (right), at the weigh-in before he challenged Donnie Nietes for the junior flyweight championship in 2015. Photo by Ryan Songalia
05
Jun
by Ryan Songalia

Former world title challenger Gilberto Parra Medina was shot to death Sunday night in the Ejidal section of Pueblo Yaqui, Sonora, Mexico, in what is being described as an “execution” style slaying.

Medina, who was just 25, was driving in a car when several gunmen pulled up in a van and opened fire, according to a report on ESPN Deportes, killing Medina and a passenger.

Details on a motive or how many times he was struck were not released.

Medina (26-4, 21 knockouts) began fighting in 2011 and challenged Donnie Nietes for the RING junior flyweight title in 2015, going down once before being stopped at the end of the ninth round in the Philippines. He won seven straight after that before losing again in his final bout on a ninth-round technical knockout to Saul Juarez this past March.

Medina, known as “Parrita,” is one of several Mexican fighters to fall victim to gun violence in recent years, including former title challenger Alejandro “Cobrita” Gonzalez Jr., who was gunned down in similar fashion last December in Guadalajara, and another former belt challenger, David Lopez, who suffered a similar fate in July 2017.