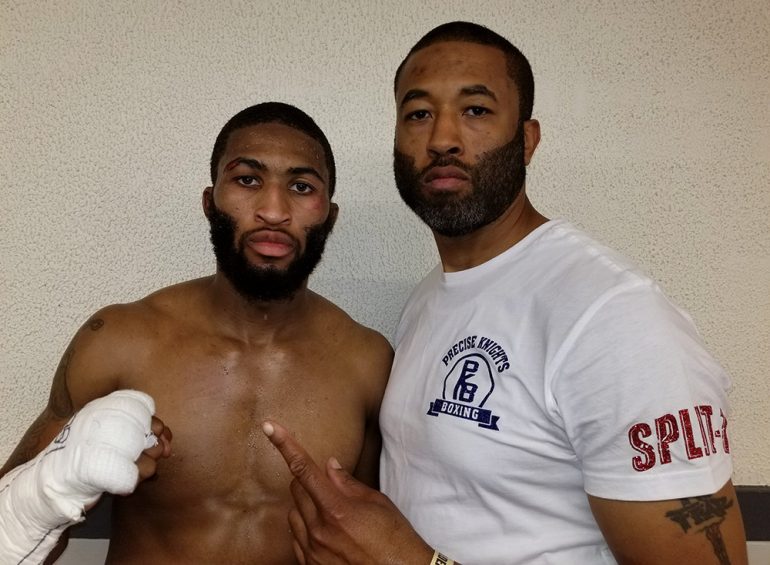 ATLANTIC CITY, NJ — Poindexter Knight Sr. received a strange call at home one afternoon 21 years ago. It was from a concerned day care worker, wondering what she’d just seen. She asked Mr. Knight if his son, Poindexter Knight Jr., took any karate or jiu-jitsu classes. Poindexter Sr. had to pause for a second, then fell back laughing.

The worker was concerned because Knight Jr. had punched a kid and dropped him. One other thing she brought up: “Your son looked professional doing it; it’s why I asked you if he took any classes or not.”

Poindexter Jr. was barely a year old at the time.

Yes, Poindexter Jr., the former National Golden Gloves champion, was knocking kids out when he was 1. The rest of his fistic firsts have come in the ring, after Poindexter Sr. scolded his oldest, who could barely walk, to keep his hands to himself — for the time being.

That time is long over. Now 22, Poindexter Jr. has been building a nice resume for himself, adding another victory Saturday night at Boardwalk Hall Adrian Phillips Theater with a four-round victory over Juan Carlos Sepulveda (0-1-1).

Knight, a rangy 6-foot-1 southpaw junior middleweight from North Philadelphia, is now 4-0 (2 knockouts) and notched his latest triumph after suffering a deep cut over his right eyebrow in the first round.

It’s the first time in his lengthy career Poindexter Jr. has ever seen his own blood in the ring. He reacted with great poise, which shouldn’t come as a surprise, since he has been duking out with opponents for the last 21 years.

“Yeah, you can say that,” Poindexter Jr. said laughing. “I was a kid who used to watch everything my father did in the house, and he would do his boxing training in the house. I learned how to walk and box at the same time. So when I went to day care, a kid put his hands on me and my father got a call I was knocking kids out.

“My dad boxed, but never went professional. I was training when I was 1. I’m serious; when I was 1. My grand mom put me in day care and that’s when my father got that call. I did what my dad was doing. I learned how to throw a punch even before I was able to walk. From that time, I was fighting.”

“I liked how PJ [Poindexter Jr.] stayed calm,” said Poindexter Sr., who trains his son. “PJ made the adjustment of keeping his elbow up, so when [Sepulveda] tried leading with his head, PJ stuck his right [forearm] to brace himself, and come up under with the left.

“PJ didn’t even know he was cut. I had to tell him after the first round. He’ll come back stronger. The guy knew he couldn’t beat PJ, so he thought he could come right at him with his head. My son never got rattled.”

Why would he? He’s been popping people since he was 1.

The was some great give-and-take, but the shame of it was that the undercard fighters had so many fans, the arena had thinned out considerably by the time the main event began. RingTV.com saw the fight much closer than two of the judges, scoring it 96-93 for Clary.

Evander Holyfield’s Real Deal Promotions has some very talented fighters on its roster. If the promotional company lacks in one area, it’s matchmaking. A number of fights, with the exception of the main event and Knight’s fight, were mismatches. Hopefully, better matchmaking will be something that will develop in time.

There is no doubting Real Deal Promotions has attracted talent.