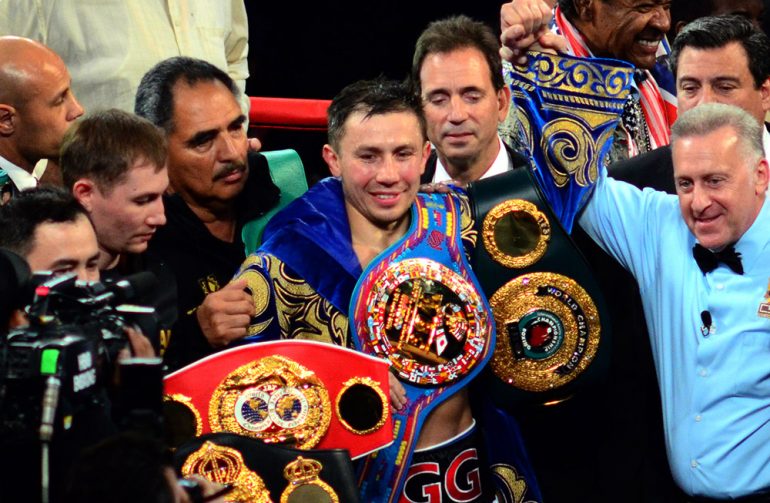 Unified middleweight champ Gennady Golovkin currently finds himself in a tough predicament. Tom Loeffler is still in talks with Golden Boy Promotion’s president Eric Gomez for a rematch with Canelo Alvarez, who is currently serving a six-month suspension related to an anti-doping offense. Meanwhile, mandatory defenses loom for Golovkin’s IBF and WBC titles against Sergiy Derevyanchenko and Jermall Charlo, respectively.

When the originally scheduled May 5 rematch with Alvarez fell apart, Golovkin ended up fighting junior middleweight perennial contender Vanes Martirosyan.  Loeffler filed an appeal with the IBF to allow the bout and they obliged, with the stipulation that GGG fight Derevyanchenko (12-0, 10 KOs) by August 3 (within 90 days after Martirosyan). Golovkin’s promoter feels that simply is not enough time to negotiate, promote and stage a fight with one of the premier attractions in boxing.

“We are more than willing to meet our IBF mandatory,” Loeffler told THE RING, “we just want the regular negotiating period per the normal IBF rules. Typically, there is a 30-day negotiating period, and if an agreement can’t be reached, you go to a purse bid. Then you have several months to put on the fight. Asking us to do all of that before August 3 hurts both sides (Golovkin and Derevyanchenko) from a promotional perspective.”

Last Tuesday, Loeffler met with IBF officials in New Jersey for six hours at an appeal hearing requesting the normal process/timeline to make a Golovkin-Derevyanchenko bout. The IBF has 10 days from the hearing to make an official ruling on the matter. For now, Team GGG plays the waiting game with the IBF, but has their focus on the WBC as well.

In an interview with ESPN Deportes this week, WBC president Jose Sulaimán stated if the Canelo-GGG rematch does not happen this year, Golovkin will have to face Charlo (27-0, 21 KOs) next.

“You can’t fight two people at the same time,” Loeffler said. “The WBC said they would extend their mandatory for the Canelo fight. An official date has not been set (for Charlo). Again, we would want things to go through the normal procedures with the negotiating period and everything else.”

Loeffler made it clear that the Canelo rematch is still their number one priority.

“I’m still in discussions with HBO and with Eric Gomez,” Loeffler told THE RING.  “Whatever posturing there is from both sides right now, this is still the biggest fight for HBO, for Canelo and GGG, and for boxing.”

The WBC/WBA/IBF middleweight titleholder would prefer to face Alvarez next, but he feels that terms of the rematch have now changed.

“GGG originally agreed to an unfair purse split for the rematch,” Loeffler said.  “After Canelo tested positive twice and got suspended, GGG asked for a better split. He wants, and deserves, more than 35%. But he wants the fight.”

Golovkin, who built his brand in America by being one of the more active fighters in the sport, just wants to get in the ring again soon.

“GGG told me to keep the May 5 date under any circumstances,” Loeffler said, “and then he told me that he wants to fight twice more this year. Regardless of who we face in the fall, we want to get in the ring again by the end of the year.”

Does that mean a unification bout with Billy Joe Saunders could be in the mix?

“We have tried to make a fight with Sunders for the last three years,” Loeffler said, “and we could never come to a number that satisfied them. We have overpaid opponents to make fights in the past. Some people just don’t want to face GGG.”

“That fight is a strong possibility for this year,” Loeffler told THE RING. “We have spoken with Bob Arum (Murata’s promoter) and he wants the fight, Murata wants the fight. Anytime you can sell out the Tokyo Dome and have tens of millions watching around the world, that’s a big fight for boxing.”

Japan has a tradition of putting on cards around the end of year, often on New Year’s Eve. A sold-out Tokyo Dome with 55,000 fans would make for an electric atmosphere, and a middleweight title bout involving a Japanese fighter against one of boxing’s stars would indeed be a special event. But could it cost GGG one or more of his titles?