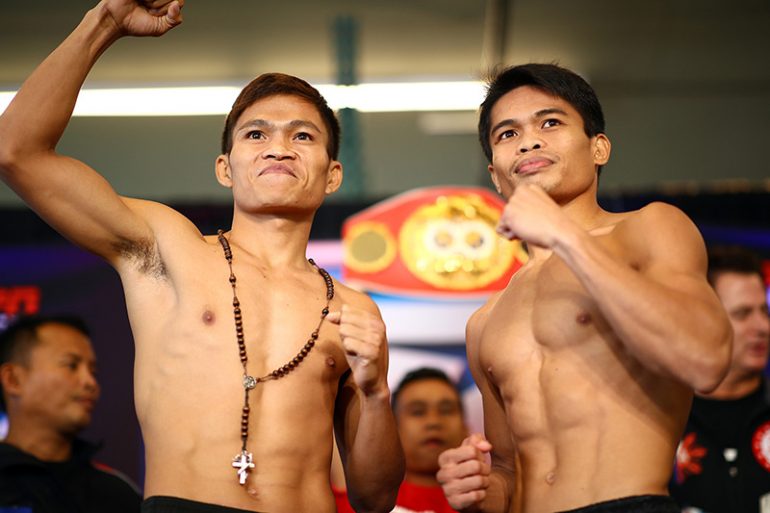 Photo by Mikey Williams / TOP RANK
25
May
by Francisco Salazar

Jerwin Ancajas and Jonas Sultan made weight for their historic all-Filipino showdown Saturday night at the Save Mart Center in Fresno, California.

Ancajas, who will be making the fifth defense of his IBF junior bantamweight title, tipped the scale at 114.8 pounds. Sultan weighed in at 114.4 pounds.

The southpaw Ancajas (29-1-1, 20 knockouts) is favored to successfully defend his world title belt but he is not overlooking Sultan, who has won his last five bouts.

“For me, Filipino boxers fight with their heart, so I consider a Filipino opponent to be difficult in the ring,” said Ancajas, who has stopped 15 of his last 16 opponents.

Saturday’s fight may be miles and worlds away from his hometown of Cavite City, but Ancajas appreciates the opportunity to headline the Top Rank card.

“It is God’s will that we are here, participants in the main event. I thank Top Rank for the opportunity.”

Sultan (14-3, 9 KOs), who is the mandatory challenger to the IBF title, has won his last five bouts. Saturday will mark the first time he is fighting for a world title belt.

“It has always been my dream to fight for a world championship, and this opportunity has come my way,” said Sultan, who resides in Cebu City. “Throughout my career, and when I was young, this is what I dreamed of. I am going to go all out to win this championship.”

“I studied Ancajas’ style very carefully, and now it’s my opportunity to do what I can.” 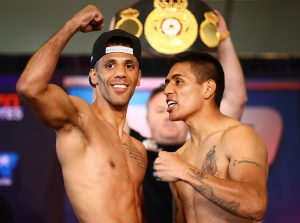 Yafai, who made weight to defend his WBA 115-pound title, and Carmona, who didn’t make weight, pose for the media. Photo / Mikey Williams-TOP RANK

Yafai was scheduled to defend his WBA junior bantamweight title against Carmona (21-5-5, 9 KOs), of Mexico City, but Carmona weighed in at 118.6 pounds, well above the 115-pound limit.

Because he failed to make weight, Carmona is not eligible to win the WBA title. Should Carmona defeat Yafai, the title becomes vacant.

Francisco A. Salazar has written for RingTV.com since October of 2013 and has covered boxing in Southern California and abroad since 2000. Francisco also covers voting for the Ventura County (Calif.) Star newspaper, Boxingscene.com, and FightNight.com. He can be reached by email at [email protected] or on Twitter at FSalazarBoxing