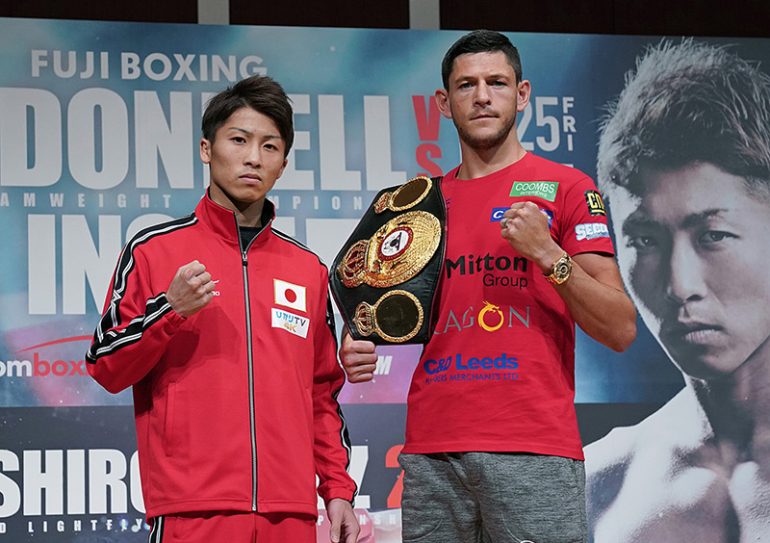 TOKYO – The mood was noticeably cautious at the final press conference for the Jamie McDonnell-Naoya Inoue bantamweight clash at the Tokyo Dome Hotel on Wednesday. The anticipated 118-pound debut of the Japanese star against the much larger U.K. veteran takes place on Friday and will be streamed live in the U.S. via the new ESPN+ app. 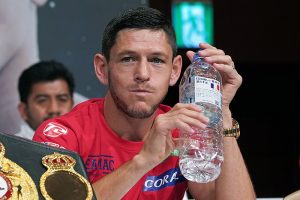 Jamie McDonnell, a large bantamweight standout, made sure to stay hydrated during the final presser for his showdown with Naoya Inoue. Photo / Naoki Fukuda

With recent weight-missing scandals plaguing Japan since last October, rumors were abound that McDonnell (29-2-1, 13 knockouts) was drinking too much water yesterday during the medical checkup. Not one to miss a beat, the Englishman pulled out a massive bottle of water, nearly empty, and began to drink it as soon as he hit the stage which sent the Japanese media into a camera-fluttering frenzy.

“I believe I’m the best bantamweight in the world,” McDonnell told THE RING when asked about Inoue’s fearsome reputation and fighting in his opponent’s home country.

“This is a great opportunity to get my name up there with all the great fighters – getting (on) that pound-for-pound list. That’s what it’s all about. Fingers crossed, I beat Inoue and you’ll see my name on the list.”

The usually very cool Inoue was still his usual focused self but he let his guard down to show some added enthusiasm when he told THE RING about his initial reaction when he learned that he would be fighting to McDonnell.

“To be honest, I was surprised,” he said. “I never knew my first fight at bantamweight would be a title shot.”[Editor’s note, McDonnell holds the WBA’s “regular” title, which is not recognized by THE RING.]

Inoue (15-0, 13 KOs), who is called the “The Monster” because of the brutal manner in which he’s stopped many opponents, had a very short and sweet answer about whether he expects another knockout on Friday:

McDonnell smiled at Inoue’s bold intention and calmly told him to “get ready for fight night.”