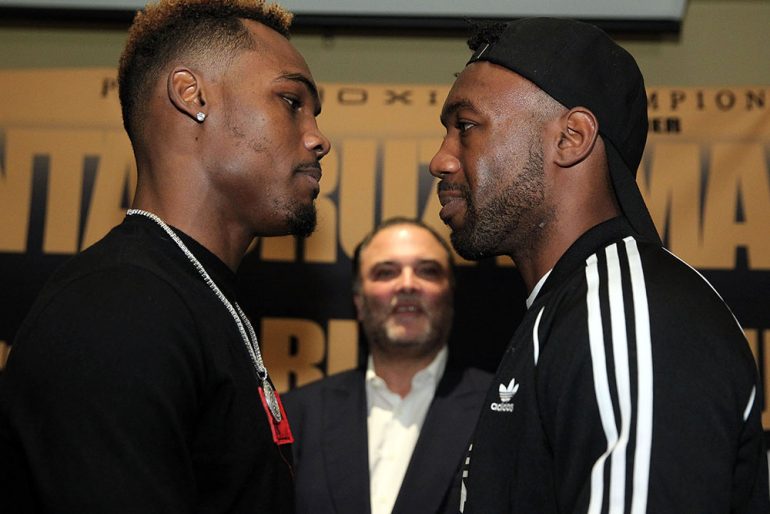 Jermell Charlo and Austin Trout face off at a press luncheon on May 8 in Los Angeles. (Photo by Chris Farina - Showtime)
23
May
by Michael Woods

The Charlo brothers’ momentum train is hurtling along at a nice speed, and almost everyone is assuming their destination will be a sweet spot. Both are seen as badasses with ‘tude and that’s a good thing, because if you are a character, compelling to media and fans alike, AND you seperate heads from shoulders with above-average punching power, that’s a delicious recipe.

The next Charlo up on stage is Jermell, the “little” Charlo. He fights June 9, and the assumption in many minds is that his foe, Austin Trout, is the designated loser in the scrap.

I’m not being mean, let’s make that certain up front, but because the Charlos have been winning and have that aura about them, Trout is being written off headed into the tango, which will unfold at Staples Center underneath the Abner Mares-Leo Santa Cruz rematch, and will screen on Showtime.

He knows it, does Trout, the 32-year-old vet who owns a 31-4 (17 KOs) mark. He knows he’s seen as a considerable underdog, and we chatted about why that perception may not be grounded in reality. Trout has been training with Barry Hunter and the Headbangers crew in the DC area.

“They don’t play there; they always push you,” Trout said. “I’m not defined by results, I’m defined by the risks I take. Jermall is the bigger fighter, Jermell is a bit faster. Mell has a good prospect on his name, but I’m a better Trout.”

Let’s unpack that a bit. Trout notes that yes, Jermell’s last win was solid. Erickson Lubin, he agrees, was a “good prospect.” But the point there is that Jermell hasn’t been in with a murderer’s row to this point. And we can all agree, really, Trout has. That’s why his point about being defined by the risks he takes rings true. He doesn’t dither and seek out exploitable soft targets. He craves fighting the top guns and working to topple them. Sometimes they topple, sometimes he takes an L. But his willingness to seek out the stern tests makes him one to admire in an age where cherrypicking is an art and science.

As for being a better Trout, he means that in his last two big-time bouts, he was coming off layoffs. His loss via UD to Jermall Charlo in May 2016…

“When you are coming off a 17-month layoff, you’re not doing what your supposed to be doing with eating, and when you get back into work you have to start all over with diet and weight loss. It’s a reset. Since I fought in February (UD win over 20-7 Juan De Angel), I came into this camp almost at fight weight and I’m working on condition and strategy versus starting from square one,” Trout said.  “I don’t know what happened with my hydration in the Hurd fight, but we are taking the steps to make sure it doesn’t happen again.”

We talked more about those Charlos. Does it help him in prepping that he’s fought a Charlo? Or nah … because they are dissimilar animals?

“I’ve been tested; Jermell hasn’t. I have fought the best and keep fighting the best. Since Jermell got with Derrick James, his other opponents have been KO’d by lesser people. He had more movement before Derrick, and now he’s sitting down on his shots,” he said, noting that Jermell is probably a bit faster than Mall, but Mall has fought and beaten better boxers. “I’ve been tagged by the best; I fought high level, world class. I’ve fought bigger, stronger.” No lie; Trout had a three-fight run as tough as anyone has attempted in recent memory: Miguel Cotto, then Canelo, then Erislandy Lara.

“Mike, first things first. First we’ve got to tame the lion in Charlo,” he said, summing up before he had to break for a 10:30 a.m. gym time.

My three cents: Jermell will be looking to one-up Jermall and take out Trout. The Trout-Mall fight was tight. Two judges saw a four-point edge for the twin, and another just a two-point edge. The Charlos as super-competitive, and so Jermell will not at all be cool with a decision. He’s going to go at Trout guns a’ blazing. The crafty lefty is a mover, so he’ll need and want to be able to maintain a pace and strategy for 12. Hurd sapped him, will Jermell do the same? What say you, readers?