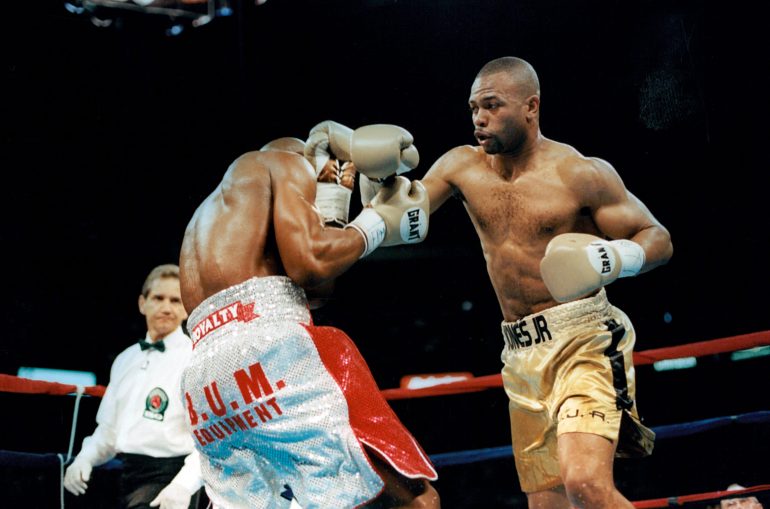 In his prime Roy Jones Jr. was a sight to behold. His otherworldly speed, reflexes and superior ability helped him procure world titles in four weight classes, and he was the first man in over 100 years to win a world title at middleweight and heavyweight.

Jones was born in Pensacola, Florida, and began boxing at a young age. He went on to represent the U.S. at the 1988 Seoul Olympics where he received silver after being unapologetically robbed of gold against Korean representative Park Si-Hun.

“It was the worst judging ever in the history of Olympic boxing,” Jones Jr. told THE RING. “To me, it’s why boxing in the Olympics in this country has gone down. How can you beat someone so bad and don’t get the gold medal, and they don’t go back and fix it?”

After going 121-13 in the amateurs, Jones made his way to the professional ranks. By mid-1993, the future hall-of-famer had worked himself into position to fight for the vacant IBF middleweight title against a then-unknown Bernard Hopkins. Jones won a 12-round unanimous decision on the undercard of Olympic teammate Riddick Bowe’s heavyweight title defense against Jesse Ferguson in Washington. 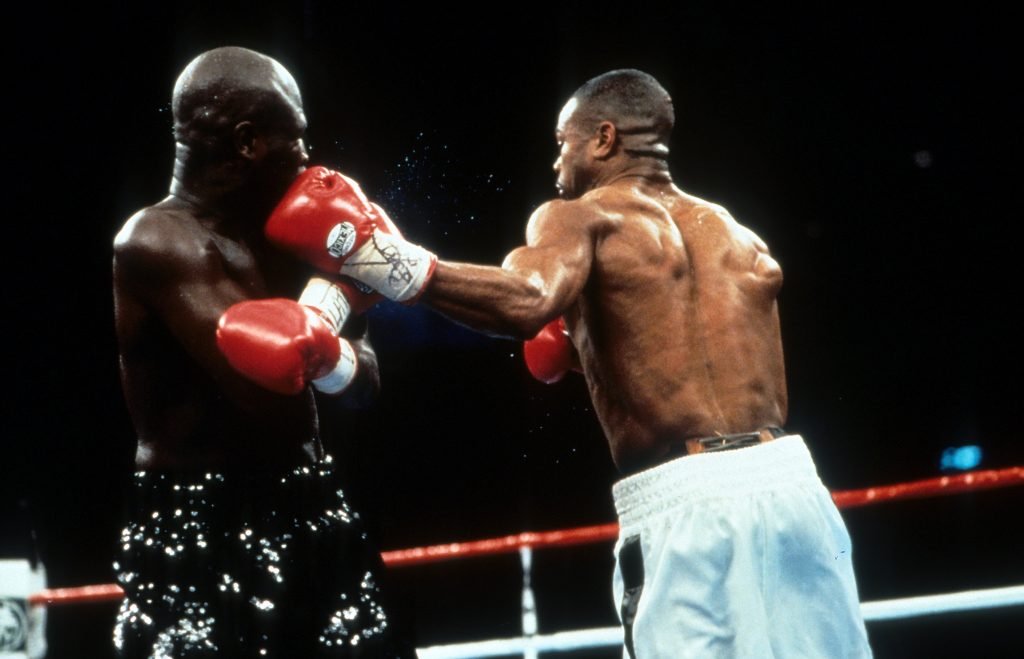 After demolishing the highly-respected Thomas Tate in his sole defense, Jones stepped up to super middleweight to face IBF titleholder James Toney, who was thought by many to be the finest pound-for-pound fighter on the planet.

Toney proved no match for Jones who comprehensively outboxed his rival. While waiting for his next big challenge, the new pound-for-pound superstar made five successful defenses and barely lost a round. Such was his dominance that in the morning of his bout with Eric Lucas, Jones played professional basketball before defeating the future world titleholder that night.

When fights with rival titleholders Nigel Benn and Steve Collins didn’t pan out, Jones elected to step up to a third weight class and in short time won the WBC title.

In March 1997, Jones was matched against the unbeaten Montell Griffin who proved to be technically troublesome. The fight was close until the ninth when a Jones assault forced Griffin to take a knee. Instead of stepping back, Jones tagged Griffin twice and was disqualified for the infringement.

The defeat lit a fire under Jones, who ripped through Griffin in the opening round of a direct rematch. The former champion considers that to be the best win of his career.

Jones added WBA and IBF light heavyweight titles to became recognized as undisputed champion (Dariusz Michalczewski held the then-lightly regarded WBO belt) and made 11 defenses over the next five years. He became a household name, appearing in films and commencing a rap career.

In March 2003, Jones made a bold step up to heavyweight and easily defeated WBA titleholder John Ruiz.

Looking back, Jones is exceptionally proud of two standout moments in his illustrious career.

“The night I beat the man (James Toney) to be the man,” he said. “Then when I defied history and was the first man ever to turn pro at junior middleweight and win the heavyweight title.” 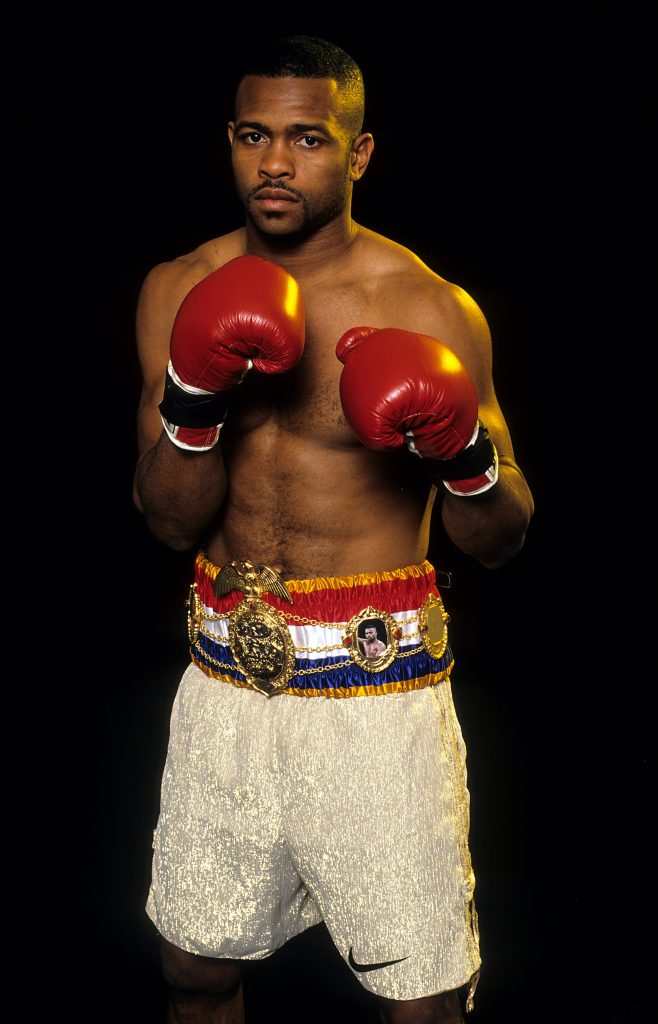 Jones at his very best. Photo by THE RING Archive

Jones decided against staying at heavyweight and dropped back down to 175 pounds. However, losing the muscle he had packed on seemed to have a detrimental effect on the then-34-year-old veteran. He was fortunate to receive a majority decision against Antonio Tarver but was sensationally stopped in the second round of a return fight. In his next outing, Jones was brutally knocked out by Glen Johnson and Tarver was victorious in a rubber match.

The once invincible Jones had lost three fights in succession.

Jones went on to outpoint former three-weight world titleholder Felix Trinidad in early 2008 and later that year met Joe Calzaghe for THE RING and lineal light heavyweight championships. Calzaghe recovered from a first-round knockdown to win a wide decision over the faded ex-champion.

“Joe was the busiest guy I fought,” Jones recalled. “I never met anyone more busy than Joe. He just stayed busy. He didn’t have the fastest hands, he didn’t have the strongest punches, he was just busy as hell. You don’t find a fighter who stays as busy as Joe Calzaghe – ever.”

Jones maintains that if they met years earlier he’d have won: “I dropped him with a shot that wasn’t even that clean,” he said. “If I’d fought him in the 90s, I think I’d have knocked him out.”

Jones continued his career up at cruiserweight until earlier this year, although he only ever showed flashes of his once-brilliant form in that weight class. He retired with a record of 66-9, 47 knockouts.

“Best I’ve ever seen,” said Jones when asked how good he was in his prime. “I’ve never seen anybody do the things I did in a boxing ring: hands behind my back knocking people out, 13 left hooks (in a row). I hit Reggie Johnson with a left hook and straight right hand so fast that they landed on the same side of his face. How do you do that? Who do you ever see do that? Nobody. Go back and watch the highlights yourself.”

Jones, now 49, is married and has six children. He works for HBO as a color commentator and also has his own promotional company, Square Ring.

The former champ graciously took time to speak to THE RING about the best he fought in 10 key categories.

BEST JAB
VIRGIL HILL: The best jab I think I faced was of Virgil Hill. His jab was the hardest punch he threw. He’d hit you on top of the head every time he threw it, and it was quick on top of that.

BEST DEFENSE
JAMES TONEY: James Toney probably had the best defense of all of them. You couldn’t hit him flush; he was so elusive, the hip movement and the shoulder roll made it very difficult to hit him with a clean shot.

FASTEST HANDS
VINNY PAZIENZA: He had faster hands than most of the guys I fought. He wasn’t powerful because he came up from the lighter weights. He thought he was faster than me, but he wasn’t.

BEST FOOTWORK
ROLLIN WILLIAMS: He had the best foot movement of anyone I faced. He was so hard to hit. It took me five rounds for me to hit him because of his foot movement. The normal punches I threw, I couldn’t hit him with.

SMARTEST
BERNARD HOPKINS: He had a real good ring IQ. He was able to study the first fight and get it right for the second fight and use the IQ to keep it where it was harder to attack the second time.

STRONGEST
MERQUI SOSA: Merqui Sosa was a very powerful guy. You couldn’t push him back; he didn’t give up anything in the ring. I had to get him out of there early. He was very strong and wasn’t planning on going nowhere.

BEST PUNCHER
SOSA: Merqui missed me with a shot that almost buckled my knees. If that had landed it would have been different. I was like, ‘Wow, this guy’s trying to kill you!’ I went to work on him after that and got the fight over. Tarver had good punching power, but he didn’t punch harder than Merqui Sosa.

BEST OVERALL
TONEY: He had all the tools, he was hard to hit, he could knock you out at any time. He would be right there in your face and you still couldn’t hit him flush.