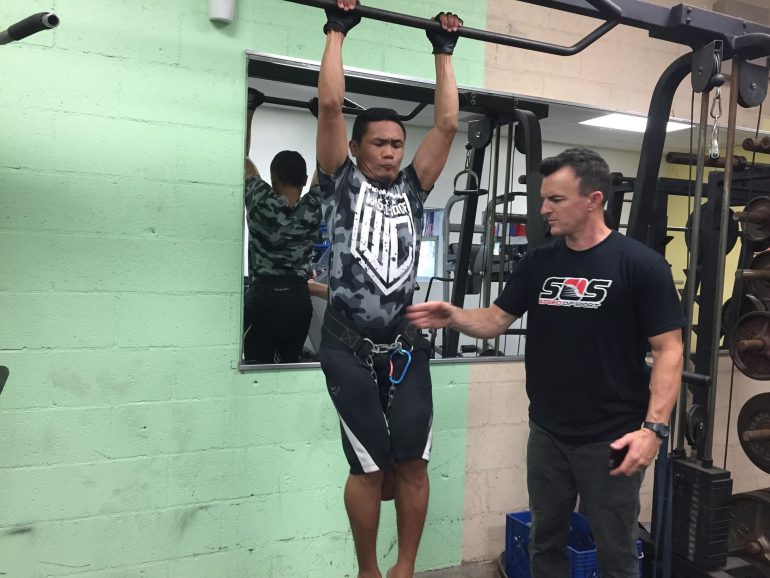 Donnie Nietes and conditioning coach Nick Curson. Photo from ALA Promotions
20
May
by Ryan Songalia

As Donnie Nietes prepares to step up once more in weight to 115 pounds, strength and conditioning coach Nick Curson is monitoring his workouts and diet to ensure he performs just as well as he had at 112 and 108 pounds.

Nietes, a former beltholder in three divisions, will try to win a title in a fourth weight class on August 18 when he faces his fellow Filipino countryman Aston Palicte in Cebu City, Philippines for the vacant WBO junior bantamweight title.

Curson has been working with the 36-year-old Nietes for pre-camp conditioning at his Speed of Sport Gym in Torrance, Calif., and will get him ready for a month before Nietes returns to the ALA Gym in Cebu to finish up camp. While Curson acknowledged the 5’3” Nietes will have to deal with some height disparities, he thinks his career will eventually take him into the bantamweight division.

“I don’t like to look too far forward but I can honestly see him fighting about 5-6 more fights, but ending up at 118. It’s possible with the nutrition program that I’ve got him on now,” said Curson, who has worked with the ALA camp since before Nietes’ 2014 rematch against Moises Fuentes, when Nietes settled their previous draw with a ninth round knockout win.

“I think Donnie likes being the smaller fighter, that’s something kind of fun for him because of his weaving style, his angles.”

Curson didn’t have as much time as he’d have liked to work with Nietes (41-1-4, 23 knockouts) before his last fight, a seventh round knockout of mandatory challenger Juan Carlos Reveco for his IBF flyweight title in his HBO debut this past February, but feels good about what they’ll be able to accomplish this time.

“I think Donnie’s gonna do exceptionally well (against Palicte). With the strength improvement we’ve made already in three weeks, it’s kind of shocking. So I think he’s definitely going to be ready,” said Curson, who is nominated for Trainer of the Year by the World MMA Awards.

In addition to his conditioning training, ALA Gym head trainer Edito Villamor says Nietes has been doing his boxing work at the Wild Card Gym and sparring with a pro bantamweight at the Maywood Boxing Club. Villamor says he’s convinced Nietes will be able to handle the strong guys he’ll face in his new weight class.

“He can now handle the big guys at 115,” said Villamor, who is also training Jonas Sultan for his challenge of IBF junior bantamweight titleholder Jerwin Ancajas on May 26 in Fresno, Calif.

One lifestyle adjustment Villamor would like to see Nietes make as he moves up in weight is cutting down on some of his out-of-the-gym activities, namely the cycling he does every night for about an hour.

“He loves cycling which is a slow twitch sport. It’s good for your aerobic energy system but for boxing it can decrease your power, your musculature. It’s just a long endurance work that’s kind of detrimental to explosive sports. It trains the fast twitch to behave like slow twitch,” said Curson.

“Donnie has looked kind of skinny the last couple of years despite working out more than before. I think a lot of that is just his extracurricular bicycling on the weekends.”