Adonis Stevenson laughs off critics as he prepares to defend title vs. Badou Jack 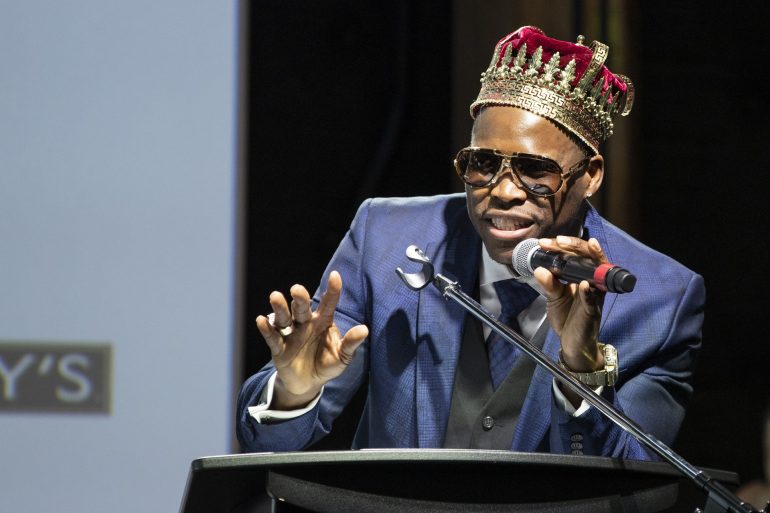 Stevenson before his fight against Badou Jack in 2018. (Photo by Esther Lin/Showtime)
18
May
by Mike Coppinger

At every step of the way, the chatter finds him. Scared to fight a real threat, they say. His detractors wail that he’s content to defend his lineal light heavyweight crown against foes who stand no reasonable chance.

Stevenson laughed off the remarks Thursday as he strutted around The Rec Room wearing an actual red crown on his head, leaving it atop his head the entire time as he tossed threats at Badou Jack ahead of their title fight Saturday at Air Canada Centre (10:05 p.m. ET, Showtime).

Unlike the vast majority of Stevenson’s eight title defenses since he wrested the 175-pound championship from Chad Dawson with a shocking first-round knockout in June 2013, Jack represents a formidable challenge, a fight fans are legitimately excited for.

The 40-year-old Canadian continued to jovially prance around the stage at the final news conference, and then walked over to Jack and handed the challenger a warning.

“Badou, are you ready? You’ve never been hit; that’s the problem,” Stevenson (29-1, 24 knockouts) said with a laugh through his thick Haitian accent. “When you get hit, it will be different. … I’m looking for the knockout so don’t blink. It’s 12 rounds and I just need one punch — only one, that’s it. Just one.

“Soon as it’s going to land I’m going to knock him out and he’s going to stay on the floor. That’s it.”

That’s been the case for all but two bouts during Stevenson’s title reign. There’s no doubt he’s one of the sport’s most devastating punchers, his overhand left always a credible threat to end a fight with the snap of one arm. Fighters usually give the canned line that they don’t seek knockouts; that if the opportunity materializes, they’ll seize it.

But Stevenson was schooled by the late Emanuel Steward of the famed Kronk gym who always told his charge: “Knockouts sell.” Indeed, it’s that left hand — “The Superman punch, I think, is the most feared in boxing right now,” Stevenson claimed — which has carried him to the top echelon of the sport, the ruler of the 175-pound division since 2013.

Now just four months shy of his 41st birthday, plagued by inactivity (two fights since 2015) and facing off against a hungry, capable foe, could this be the end of the road for Stevenson? He’s the second-longest reigning champion in boxing, but they all come to an end eventually.

“That’s why the call me Superman: At 40 years, I’m still champion,” said Stevenson, THE RING’s No. 2 light heavyweight. “I started my pro career at 29 years old, I don’t get beat a lot, I don’t get punched a lot and I’m always training, always staying in shape.

“I would love to beat Bernard Hopkins’ record. I’m still hungry and I have a lot of motivation.”

The mark Stevenson speaks of was set by Hopkins in 2013 when he beat Tavoris Cloud, breaking his own record as the oldest fighter ever to win a world title. Hopkins was 48 years old then and it’s a record that figures to stand the test of time.

When pressed, Stevenson was steadfast that he was serious about chasing that record.

“He’s as good as when he was younger, but he has more doctors and physio(therapists) around him than in the past,” said Yvon Michel, Stevenson’s longtime promoter. “He told me ‘I enjoy training, I enjoy getting in the ring and defending my title and beating up on guys.’

And now, Stevenson prepares to turn back yet another challenge, and a victory over Jack, 34, surely would stand as the most significant title defense of his career.

Jack (22-1-2, 13 KOs) is strong, determined and the fight with Stevenson will mark his sixth consecutive bout against a current or former world titleholder.

If Stevenson is worried about the step-up in competition after so many years of infrequent fighting against inferior opposition, he didn’t show it. Instead, he was ready to talk about the big plans he has ahead.

A fight with Andre Ward, the fighter who retired as the pound-for-pound best in the sport, sits atop Stevenson’s wish list.

But first, Stevenson needs to take care of business one more time, critics be damned.