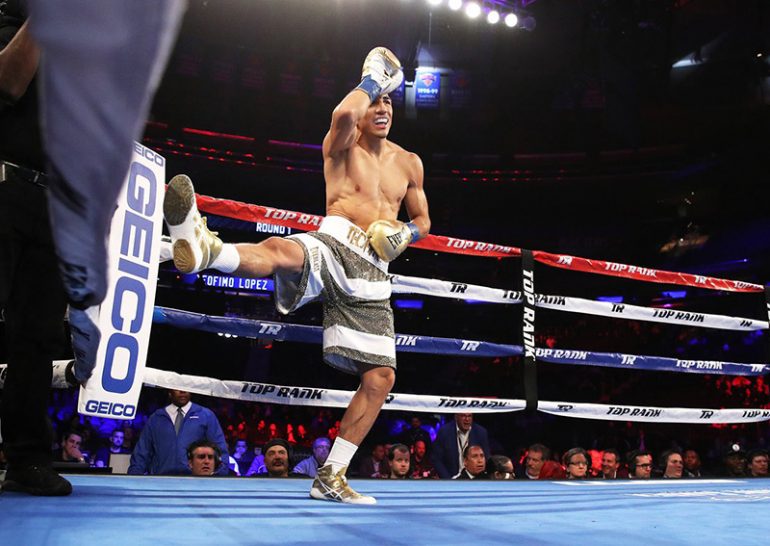 Teofimo Lopez does his "L" dance after scoring a first-round KO. Photo / Mikey williams-TOP RANK
12
May
by Michael Woods

Teofimo Lopez might not be the best prospect in the game today. But he lacks not for courage of convictions. The New Yorker believes he is, and he must be on your watch list, because it is clear he wants to stand out, wants to be a cut above, and leave a lasting legacy.

At the Wednesday open to the public workout, he did three backflips, sending the signal ‘Loook at meeee, weeeee.’ He sent the same signal Saturday, this time with more violent intent. A right hand felled Vitor Freitas and he was jello-limbed. The doc came up on the apron before the count reached three and just that quick, Lopez scored the ‘W.’

In the first, we saw that the Brazilian didn’t look out of his depth. A counter right from Teo, though, sent him a signal. And then down he went. And the backflipping started. The ref told Leo to chill, the doc was still assessing the loser.

The time was 1:04; the ending blow was a right hand, that may have been behind the head, unintentionally, as Freitas surged forward.

He spoke to Chris Mannix after, and thanked God and then said he dedicated the win to his sis, whose birthday is Sunday. He said the finishing blow was intended as a right hook. It landed maybe behind the ear, Mannix said, and Lopez said it was a good shot, not a rabbit punch. “I want people to see my skill set, I worked really hard for this fight,” he said. He’s 20, he said, he’s young, still learning, and is aiming for a takeover.

This kid will see his profile grow. Some will dig his ambition and confidence, and others will love to hate those elements. I chatted with him after he showered. He was ringside, saying hi to the big league fight writers, and I ambled over. I offered congrats and he said thanks for noticing. “Man, I can see what’s gonna happen. People gonna love you and because of that confidence,” I said….

“They’re gonna hate me too,” Lopez finished for me.