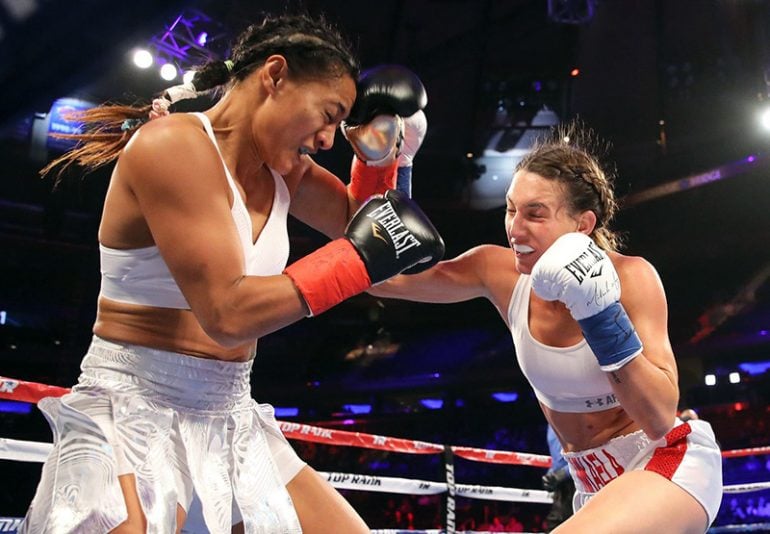 Mayer takes it to Nansen. Photo / @TRboxing
12
May
by Vladimir Lik

Sporting a six-inch height advantage Mayer (4-0, 3 KOs) was able to dominate Nansen (6-2-1) by fighting from a distance and landing hard right hands at will to stun and push back the overwhelmed New Zealand fighter. The 27-year-old Mayer caught Nansen flush with almost anything she wanted to throw, badly injuring Nansen’s eye and bloodying her nose.

Although this was supposed to be step up in competition for the Los Angeles native, by the second round she was in complete control and snapping Nansen’s head back violently. Mayer did a better job of stringing her punches together in the third round and almost got Nansen out of there as the shorter fighter was hardly able to defend herself.

Sensing Nansen had all but faded away in the fourth round Mayer went into cruise control landing her long jab and following up with a straight right sending Nansen backwards. The 5-foot-9 Mayer busted Nansen’s eye in the fifth round with stinging combinations causing her to retreat and look for anyway to stay in the bout. Mayer stalked her but was unable to cut the ring off long enough to get her out of the bout.

Fighting at Madison Square Garden for the first time as a professional, the 32-year-old from New York’s Long Island gets back in the win column by putting away the overmatched Sanchez. Herring had Sanchez stunned against the ropes in the fourth with referee Anthony Chiarantano leaning in and keeping a close eye on Sanchez but the veteran Mexican fighter held on to Herring for dear life and survived the round.

In the fifth round Herring, who enjoyed a 4 inch height advantage over Sanchez jumped and hurt him with an overhand left. Herring kept the pressure on Sanchez and delivered a hard body shot sending Sanchez into the ropes almost indefensible. Herring siezed on Sanchez with a big left-right combination and the referee jumped in to save Sanchez and stop the bout.

Herring brushed off a small cut around his right eye caused by an accidental headbutt in the second round which caused him to become a bit more cautious to lean in and throw anything meaningful. By the third round Herring regained control and found comfort that he was the quicker and stronger man. Herring had Sanchez fighting off the backfoot most of the round until he finally hurt him in the fourth.

Herring won his first fifteen fights after serving 2 tours of duty in Iraq with the United States Marine Corps and representing the U.S. at the 2012 London Olympics. Herring has now pressed the reset button after losing two of his last three bouts and leaving Al Haymon’s PBC stable while also switching trainers. Herring is now trained by Terrence Crawford’s trainer Brian McIntire.

In the opening bout of the evening super lightweight prospect Fazliddin Gaibinazarov (4-0, 2 KOs) scored a fourth round TKO victory over Jesus Silveyra (8-6-2, 3 KOs). The official time of the stoppage was 2:05.

The 26-year-old Gaibinazarov, who won a gold medal at the 2016 Olympics, threw a bevy of left hands at Silveyra  and was just too much for the Mexican fighter. Gaibinazarov dropped Silveyra twice in the fourth round as the former Uzbeki southpaw unleashed a powerful left-right combination. Referee Ron Lipton called an end to the bout as soon as Silveyra was floored again.