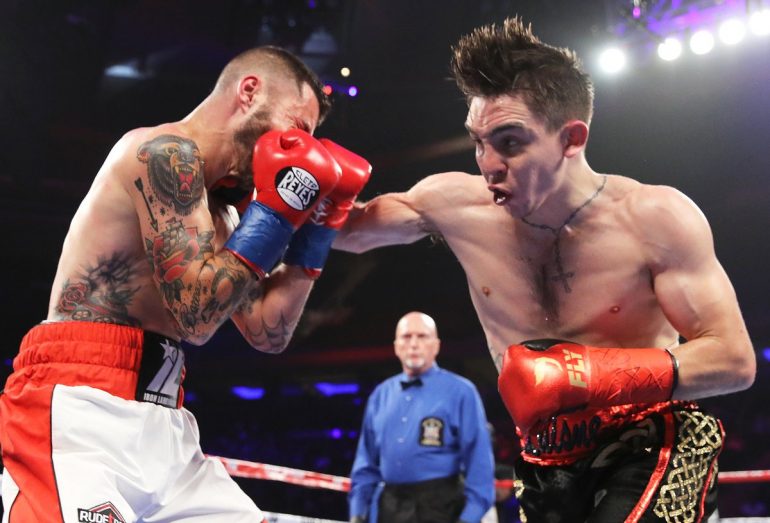 NEW YORK — Michael Conlan had the right idea when he walked out to the ring accompanied by U2’s “Sunday Bloody Sunday,” decked out in his own custom Knicks jersey to play to the crowd at Madison Square Garden.

Like the song, Ibon Larrinaga couldn’t close his eyes and make Conlan go away in their featherweight bout on the Jorge Linares-Vasiliy Lomachenko undercard.

Matched against a Spaniard without much pop behind his punches, the 26-year-old Conlan (7-0, 5 knockouts) marched forward with impunity, landing overhand rights with regularity en route to a unanimous decision win. The scores were 80-72 in Conlan’s second eight-round scheduled bout, and just his second time being taken the distance.

The fight was Conlan’s second since moving his training grounds from California to London and switching head trainer to Adam Booth (with former WBO middleweight titleholder Andy Lee assisting).

Conlan, a two-time Olympian representing Ireland, switched briefly to southpaw in the sixth round but spent most of the fight mauling the defensive Larrinaga (10-2, 2 KOs), who had just been stopped in two rounds by Aritz Pardal last December.

Next up for Conlan is his homecoming fight on June 30 in Belfast, his first time fighting as a pro in his hometown. The last time Conlan had fought there was in 2011 as an amateur. 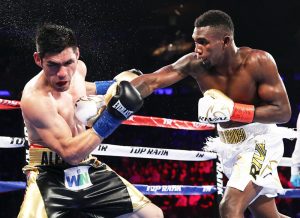 Lands a big right against the durable and game Barrera. Photo / @TRboxing

Carlos Adames (14-0, 11 KOs) had more return fire to worry about than did Conlan in the show’s co-featured bout.

The unbeaten Dominican fighter still passed the biggest hurdle so far of his nearly three-year pro career, outpointing Mexico’s Alejandro Barrera to win a 10-round unanimous decision in the welterweight fight by scores of 97-93, 96-94 and 98-92.

Barrera (29-5, 18 KOs) was a hard man to break, firing back hard with right hands and uppercuts in the third and fifth after absorbing repeated “one-time” shots to the head. By the eighth round Barrera wasn’t just fighting on even terms, he was pushing Adames to the ropes and getting in his own shots.

The fight was just Adames’ third time going the distance, with Errol Spence remaining the only man to ever stop Barrera inside the distance.

Barrera has now lost three of his last four fights.